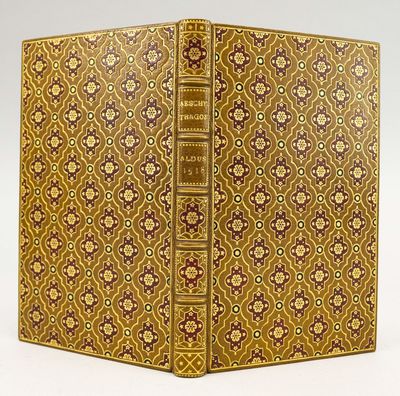 by (BINDINGS - MOSAIC). (ALDINE IMPRINT). AESCHYLUS
Venetiis [Venice]: In aedibus Aldi et Andreae Soceri, February 1518. EDITIO PRINCEPS. 157 x 95 mm. (6 1/8 x 3 3/4"). 113, [1] leaves (complete). Edited for the press by Franciscus Asulanus. EDITIO PRINCEPS. SUPERB LATE 19TH CENTURY CITRON MOROCCO, INLAID IN A MOSAIC DESIGN, covers diapered and inlaid in red and black morocco "à répétition," raised bands, spine gilt in similar inlaid compartments, gilt titling, HONEY BROWN MOROCCO DOUBLURES with gilt dentelle frame, monogram of collector Robert Hoe at foot, highly burnished gold endleaves, all edges gilt. In a red cloth chemise and a tan morocco pull-off case. Printer's dolphin and anchor device on title and final page. Verso of front free endpaper with the morocco bookplate of Robert Hoe. Dibdin I, 234; Adams A-262; Renouard p. 85, No. 9; Isaac 12897; Ahmanson-Murphy 143. A couple of small, faint brown stains, text lightly pressed in keeping with bibliophilic fashion at the time of binding, otherwise A SPLENDID COPY INSIDE AND OUT, clean and crisp internally, with only the most trivial imperfections, and THE GLORIOUS BINDING IN SPARKLING CONDITION. This is the first printing of the extant tragedies of the Greek playwright Aeschylus in a splendid mosaic binding and with illustrious provenance. Surprisingly, the binding here is unsigned, but the quality of the workmanship and the materials confirm this as the work of a master artisan. Similar bindings have been produced by Trautz-Bauzonnet, Emile Mercier, and the Club Bindery. Our previous owner Robert Hoe was one of the founders of this last workshop, and a mosaic "répétition" binding created for him by the Club Bindery, and with his monogram on the doublure (as here), was shown in the Grolier Club's exhibit of mosaic bindings in 1902 and again in its exhibition in 1906 of books bound at the Club Bindery. It appears in "Bound to Be the Best" as #11. The perfection of the finishing would be typical of the work of Léon Maillard, one of the best finishers of his generation, who was lured to America by Hoe in 1897 to join the team at the Club Bindery. Scholars of the Greek Classics will note that our Aldine editio princeps contains six plays--"The Persians," "Seven against Thebes," "The Suppliants," "Agamemnon," "The Eumenides," and "Prometheus Bound"--rather than the seven known to survive from the estimated 70 to 90 dramas Aeschylus (ca. 525-455 B.C.) produced. The explanation includes one of the few failures of the Aldine editors: when Aldus' brother-in-law Francesco d'Asola was preparing the text, he did not catch an imperfection in his source manuscript: it was lacking several pages, which happened to contain the end of "Agamemnon" and the beginning of the next play in the Oresteia trilogy, "The Libation Bearers." Consequently, the Aldine first edition combines the two plays under the title "Agamemnon," a mistake not corrected for nearly 40 years. The printing in the elegant Aldine type is lovely, and the extraordinarily beautiful binding is enough to make a collector as fastidious as Robert Hoe forgive the text's shortcomings; this is especially true because this error occurred in all copies of this original printing and because this first appearance of the works of someone recognized as the Father of Tragedy would have been a significant addition even to his vast and wonderful library. It is said by Beverly Chew that Hoe (1839-1911), founding member and first president of the Grolier Club, had a collection that was "the finest [America] has ever contained." He acquired illuminated manuscripts, early printing (he owned a Gutenberg Bible on paper and one on vellum), fine bindings, French and English literature, and Americana, and when his library was sold in 1911-12, it fetched nearly $2 million, a record that held until the Streeter sale more than 50 years later. (Inventory #: ST14538)
$49920.00 add to cart or Buy Direct from
Phillip J. Pirages Fine Books
Share this item