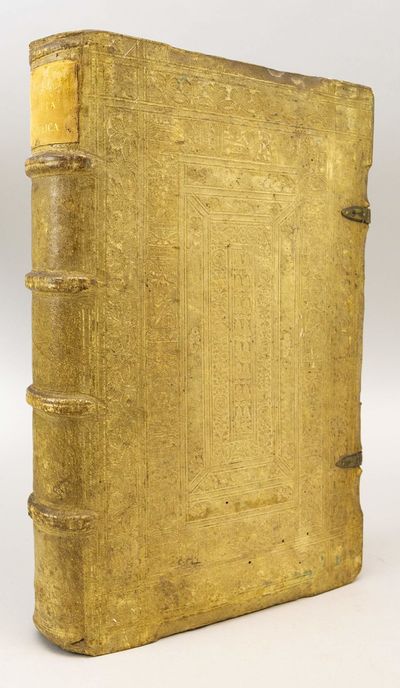 by (BINDINGS - THUMM). (COUNTER-REFORMATION). LINDANUS, WILHELMUS [LINDT, WILLEM VAN DER]
Coloniae Agrippinae [Cologne]: Maternus Cholinus, 1563. Third Edition. 333 x 206 mm. (13 x 8"). 14 p.l., 720 pp., [12] leaves. Third Edition. CONTEMPORARY BLIND-STAMPED PIGSKIN over bevelled wooden boards BY SIMON THUMM (medallion roll signed with initials "S. T."), covers with multiple blind rolled frames, including palmettes, Thumm's David / Saint Paul / Saint John / Salvador Mundi roll (Haebler #2) and the signed medallion role with helmeted and laurel-wreathed heads (Haebler #5), central strip with repeating acorn stamps, raised bands, later tan morocco label, two original brass clasps. Title page with early ink owner inscriptions; occasional contemporary marginalia; modern bookseller's description laid onto rear pastedown. Adams L-720; VD16 L 1941. For the binding: Haebler I, 448 #2, 5. Pigskin somewhat soiled, a couple of tiny tears at head and tail of spine, corners rubbed to boards, leaves mildly browned due to paper quality, occasional minor marginal dampstains, otherwise an excellent copy, the text clean and crisp, and the unsophisticated binding solid and appealing. This is an important work by a leader of the Counter-Reformation in Holland, offered in a binding by a well-known Augsburg artisan. Lindanus (Willem van der Lindt, 1525-88) was a Dutch Catholic theologian during the period when Calvinist belief was sweeping through the Low Countries. Loyal to Philip II, the Spanish monarch of Holland, Lindanus supported the cause of Catholicism through his many books and in his offices as chief inquisitor of Holland, bishop of Ruremonde, and bishop of Ghent. First published in 1560, this examination of the gospels is one of his major works. Haebler documents the binder Simon Thumm in Augsburg as early as 1528, and notes that he was still in business there through the middle of the 16th century. The rolls used on our binding have also appeared on works published in 1554 and 1564. (Inventory #: ST14408)
$2340.00 add to cart or Buy Direct from
Phillip J. Pirages Fine Books
Share this item