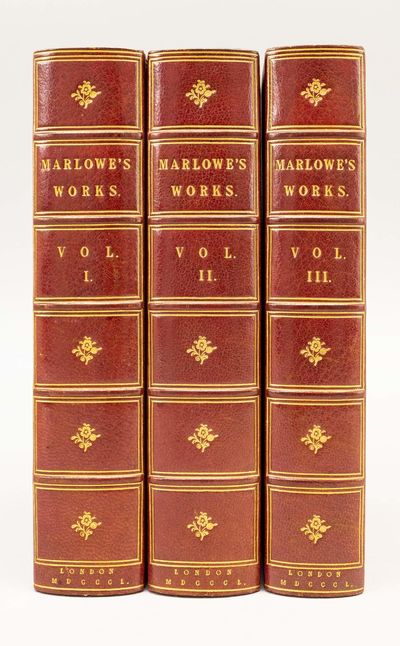 by (PICKERING IMPRINT). MARLOWE, CHRISTOPHER
London: William Pickering, 1850. 207 x 140 mm. (8 1/8 x 5 3/8"). Three volumes. EXCELLENT CONTEMPORARY CRIMSON CRUSHED MOROCCO BY HOLLOWAY (stamp-signed on front turn-in), covers with double gilt fillet border, raised bands, spine compartments with gilt floral sprig, gilt titling, gilt-ruled turn-ins, green endpapers, top edges gilt, other edges untrimmed and MOSTLY UNOPENED. Keynes, p. 66 Spines with just a hint of dulling, leaves a shade less than bright, occasional minor foxing, otherwise a very fine set, the interior clean and fresh with generous margins, and the bindings lustrous with minimal shelfwear. Finely bound and very little used, the present item represents what Keynes calls "a very beautiful edition," the type of aesthetically pleasing scholarly set that would have been right at home in a Victorian gentleman's library. Although his life was cut tragically short, Christopher Marlowe (1564-93) is still considered to be one of the most important dramatic writers of the Elizabethan period; his output includes "Tamburlaine the Great," "The Tragicall History of Dr. Faustus," and "The Famous Tragedy of the Rich Jew of Malta," which are still produced with frequency today. Our printing of his works comes with notes and a life of Marlowe by Alexander Dyce (1708-1869), a frequent collaborator with Pickering and an important and scrupulously reliable literary scholar in his own right who, according to the DNB, "did much to rescue Shakespeare's precursors and contemporaries from the neglect of the eighteenth century and added considerably to the stock of knowledge of the Elizabethan stage." Pickering began in 1828 to use the familiar anchor and dolphin device employed by the Aldus family of Venetian printers in the late 15th and 16th centuries, and he had the same purpose behind his work as did his Aldine predecessors--to provide the public with well-printed texts that were nevertheless obtainable even by persons of modest means. Although we could discover very little about our binder other than that he was active in London from the early 19th century, the bindings are nonetheless tasteful and elegant in their simplicity, making them a fine addition to any shelf. (Inventory #: ST14850)
$1560.00 add to cart or Buy Direct from
Phillip J. Pirages Fine Books
Share this item