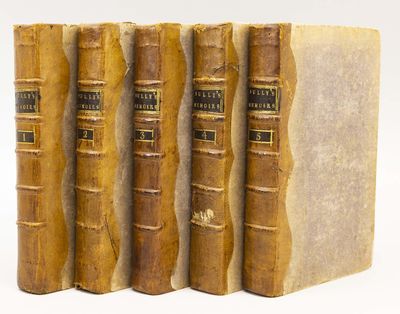 by SULLY, MAXIMILIEN DE BÉTHUNE, DUC DE
London: A. Millar; J. Dodsley; and W. Shropshire, 1757. Second edition. 222 x 140 mm. (8 3/4 x 5 1/2). Five volumes. Second edition. Contemporary gray paper boards backed in sheep (with unusual wavy edges), raised bands, black morocco labels with gilt titling. Front pastedowns with armorial bookplate of Francis Eyre of Warkworth, Northamptonshire. Corners slightly bumped and edges a little tattered, one spine with minor loss to leather in one compartment, boards a bit rubbed, but overall the contemporary bindings very sound and in excellent condition; the occasional small blemish, a few marginal open tears, one closed tear minimally affecting text, but internally very well preserved in general. This is the first English translation of the memoirs of French statesman Maximilien de Béthune, Duke of Sully, undertaken either by Samuel Johnson or by best-selling female novelist Charlotte Lennox, and offered here in the original, unsophisticated bindings. A Huguenot of noble family, Sully (1560-1641) was presented to the Protestant King Henri of Navarre when he was 11 years old and became permanently attached to that monarch until the king's assassination in 1610. Sully, although a lifelong Protestant himself, encouraged Henri to convert to Catholicism in order to become King Henri IV of France, arranged for the marriage of Henri to Marie de Medici, and served as a lifelong advisor and confidante to the king. His insider's views of this crucial period of French history make his "Memoirs" of continuing interest to scholars. Originally published in French in 1638, the first edition in English appeared well over 100 years later, in 1756 (a year before our second edition). The ESTC notes that the translator may have been Samuel Johnson, but the book itself (as well as later editions) credits Charlotte Lennox (ca. 1729-1804), author of popular women's adventure novels, including "The Female Quixote." She was born in the American colonies, but spent her working life in England, where literary friends and supporters included the aforementioned Johnson. The bindings here are not extraordinarly attractive, but they are interesting as specimens of an unusual, slightly rustic, design: the wavy edges where the leather and paper meet are clearly purposeful and add a playful element not usually seen in modest bindings such as these. (Inventory #: ST14844)
$988.00 add to cart or Buy Direct from
Phillip J. Pirages Fine Books
Share this item