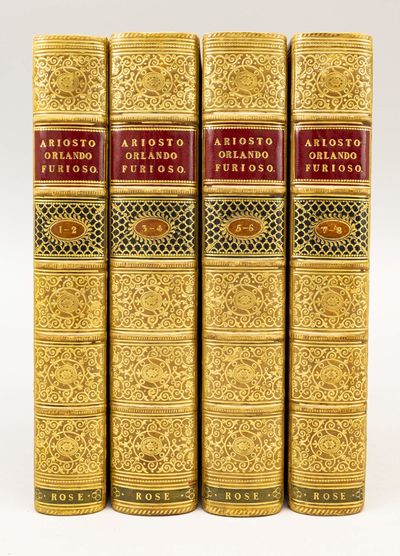 by (BINDINGS - FINELY BOUND SETS). ARIOSTO, LUDOVICO
London: John Murray, 1823-31. 200 x 120 mm. (7 7/8 x 4 3/4"). Eight volumes bound in four. Translated and annotated by William Stewart Rose. LOVELY CONTEMPORARY POLISHED CALF, GILT, BY WHITE (stamp-signed on verso of front free endpaper), covers with gilt-rule border, raised bands, spines richly gilt in compartments with central patera surrounded by curling flourishes, one red label with gilt lettering and one black label gilt in a latticed pattern, an oval inlay at center with volume numbers, marbled endpapers and edges. A little spotting to covers, extremities slightly rubbed, two boards with a couple of tiny nicks (one with a small indentation), otherwise a very fine set, clean, fresh, and bright internally with few signs of use, in attractive bindings that make a glittering display on the shelf. Beautifully bound and issued over the course of nine years by an eminent London publisher, this is an early 19th century edition of the great sprawling romantic epic by Ariosto (1474-1533), 50,000 lines long, 26 years in the making and refining, and one of the most influential works of literature ever produced. Among those writers indebted to Ariosto are Tasso, Cervantes, Spenser, Shakespeare, Milton, Byron, and Shelley. The verse translation here was the magnum opus of poet and translator William Stewart Rose (1775-1843), in which he was encouraged by his friend Sir Walter Scott. In the mistaken belief that Rose was the poet responsible for the popular "Beppo"--in fact written by Rose's friend and fellow expatriate in Italy, Lord Byron--publisher John Murray paid the author the enormous advance of £2,000 for this translation, which he had already been working on for some time. If he was not the fastest worker in the world--as the nine-year publication span indicates--Rose did give value for the money, providing annotations, a list of "Dramatis Personae," and a general index that are most useful to the reader. The former owners of the present set seem to have taken no advantage of its many benefits, and it appears to have remained, virtually untouched, on the shelf, consequently changing little since the days its most attractive bindings graced a Victorian gentleman's library. The binder's stamp in our volumes indicates an address at 24 Pall Mall, London; Ramsden lists a J. White at that address in "London Book Binders 1780-1840." White was apparently no longer in business by 1837, as that name and address are not among the businesses listed in Packer's "Bookbinders of Victorian London." Ramsden notes that White used a drawer handle tool imitating that of 17th century binder Samuel Mearne, so he clearly had some knowledge of binding history and had studied masters of the craft. He was an excellent artisan, as our binding, with its fine, smooth calf and especially lovely spines, attests. (Inventory #: ST14857)
$1300.00 add to cart or Buy Direct from
Phillip J. Pirages Fine Books
Share this item