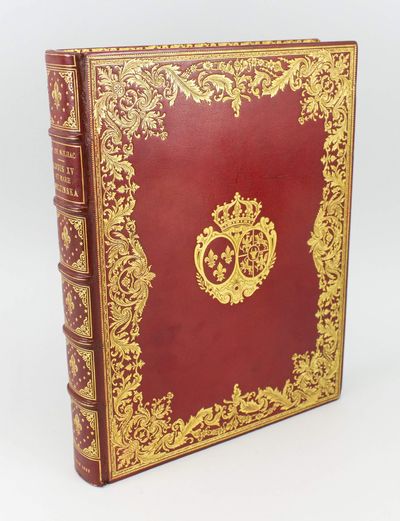 by (BINDINGS - DURVAND). NOLHAC, PIERRE DE
Paris: Goupil et Cie, 1900. No. 97 of 1,000 copies. 326 x 246 mm. (12 7/8 x 9 3/4"). 4 p.l., 189 pp., [1] leaf. No. 97 of 1,000 copies. FINE RED MOROCCO, ELEGANTLY GILT, BY DURVAND (signed at foot of frame on covers), boards with ornate gilt Rococo frame enclosing central arms of Louis XV and Marie Leczinska, raised bands, spine gilt in compartments with either titling or central fleur-de-lys within a lozenge of small tools and corner volutes, turn-ins with leafy gilt roll, marbled endpapers and flyleaves, top edge gilt. Original paper wrappers bound in. With engraved head- and tailpieces and 41 engraved plates, as called for, all with original lettered tissue guards. Foot of upper joint just beginning to crack, some noticeable wear to edges, with the leather at three corners worn through (though the appearance improved with refurbishing); the elaborately gilt binding still lustrous and generally pleasing, and entirely clean, fresh, and bright internally. This binding by one of the great Parisian ateliers is encrusted with elaborate gilt and emblazoned with the coat of arms of Louis XV and Marie Leczinska, queen consort of France for 42 years--the longest tenure of any queen of that nation. The couple married when Marie was 22 and Louis only 15 years old, and by all accounts, their early relationship was quite happy. Whereas Louis would go on to engage in numerous affairs (including with the notorious Madame de Pompadour and the Mailly sisters), Marie (1703-68) was known for her deep sense of piety and royal duty. Although she never gained any real political influence, as a model of Christian generosity and modesty, she won respect at court as well as popularity among the people. Historian Pierre de Nolhac (1859-1936) led the efforts to restore the Palace of Versailles to its former glory and open it as a museum. He was an author of a number of works on the ancien regime, focusing especially on the reigns of Louis XV and Louis XVI. Our binder Durvand (1852-1924) operated one of the finest workshops in turn-of-the-century Paris, and trained a number of talented artisans. In 1900 he was awarded a silver medal for his bindings at the Universal Exhibition, and, according to Flety, he was devoted to improving the craft of binding right up to his death. (Inventory #: ST13183)
$1872.00 add to cart or Buy Direct from
Phillip J. Pirages Fine Books
Share this item