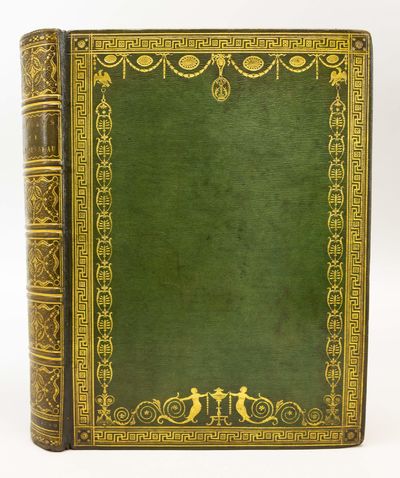 by (BINDINGS - KALTHOEBER). ROUSSEAU, JEAN-BAPTISTE
Paris: P. Didot, fils aîné de F. A. Didot l'aîné, 1790. ONE OF 250 COPIES. A Large Paper Copy. 325 x 235 mm. (12 3/4 x 9 1/4"). xii, 560 pp. ONE OF 250 COPIES. A Large Paper Copy. HANDSOME GREEN MOROCCO, GILT IN THE NEOCLASSICAL STYLE, BY CHRISTIAN SAMUEL KALTHOEBER, covers with Greek key border enclosing central panel framed by a chain of palmettes at sides, each descending from the grip of an eagle, garlands and pateras across the top, and the foot with two mermaids flanking an urn, double raised bands separated by thick gilt rule, spine compartments densely stippled, with palmette at center surrounded by garlands and small tools, circlets at corners, gilt titling, turn-ins with Greek key roll, marbled endpapers, original leather hinges, all edges gilt. Engraved arms of the Dauphin on title page. Brunet IV, 1421. For the binding: Foot, Henry Davis Gift II, 189; Maggs 1075, no. 219 and 1212, no. 164; Oldaker Collection 21; British Library Database of Bookbindings, Shelfmark Davis194. Spine uniformly sunned to olive brown, joints showing minor wear (front joint with tiny crack at head and foot), small tear to foot of spine, corners slightly bumped, a couple of dark spots and trivial indentations to boards, but the binding quite sound and still lustrous. Occasional mild marginal foxing, otherwise a fine copy, clean, smooth, and bright internally, with generous margins. Printed by order of the king of France for the education of the Dauphin, this lovely large-format Didot edition of the poetry of Jean-Baptiste Rousseau is offered here in a wonderful Neoclassical binding. Dramatist and poet Rousseau (1671-1941) produced formal odes and sacred cantatas, but was best known for his biting and witty epigrams, which Britannica tells us "are considered his best work and are perhaps the best of their kind in the 18th century." The vicious digs brought him fame, but also attracted suits for libel and defamation, which resulted in his being exiled from France for the last 29 years of his life. The present work contains 23 examples of these witticisms. Our master binder Kalthoeber (1775-1817) was "considered during his day to be the finest binder in the world," according to Maggs Catalogue 966. He came to London from Germany, along with several countrymen, in order to fill the need generated by the gentlemanly English fashion of forming large libraries filled with sumptuous bindings, working at first for the well-respected Baumgarten and then succeeding him in 1781. One of his bindings was priced at the unheard of sum of 30 guineas, and its reputation became such that George III insisted upon seeing it; his fame spread to the point where the Czarina made persistent (but fruitless) efforts to induce Kalthoeber to come to St. Petersburg. Although our binding is not signed, it shares tools and a nearly identical design with item no. 189 in volume II of "The Henry Davis Gift," where Foot observes that Kalthoeber had used these tools and design on at least six other bindings, and with items #164 in Maggs Catalogue 1212, where it is noted that Kalthoeber acquired the Eagle tool when he took over the Baumgarten workshop. The present combination of stately printing and regal binding is a superb example of the best kind of book production in the late 18th century. (Inventory #: ST14417)
$6136.00 add to cart or Buy Direct from
Phillip J. Pirages Fine Books
Share this item