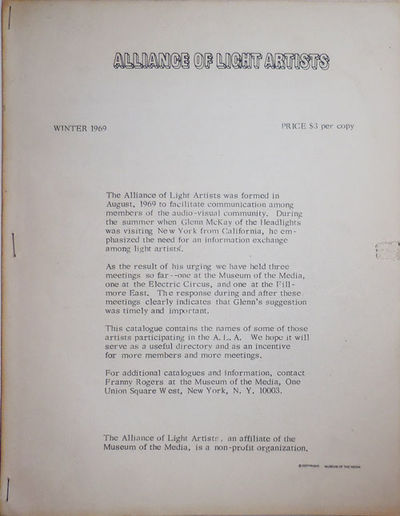 by Light Art - Alliance of Light Artists
New York: Museum of the Media, 1969. First edition. Paperback. Very Good. Tall side-stapled wrappers. A 35 pp catalog produced by Museum of the Media in Winter 1969. Includes short statements by some of the participants in the light art movement, advertisements, announcements of exhibitions etc. According to the opening summary paragraph on the first page "The Alliance of Light Artists was formed in August, 1969 to facilitate communication among members of the audio-visual community. During the summer when Glenn McKay of the Headlights was visiting New York from California, he emphasized the need for an information exchange among light artists. As the result of his urging we have held three meetings so far - one at the Museum of the Media, one at the Electric Circus, and one at the Fillmore East..." Some of the names of artists participating in this group included Faye Barth, June Blum, Geoffrey Ryn Carlitz, The Celebration Light Show, and Jud Yalkut, among several others. In very good condition. This copy was mailed to A.L.A. member and avant-garde filmmaker Jud Yalkut in December 1969. Quite a scarce little publication. We found no listings for sale in commerce, nor any copies in institutional hands. (Inventory #: 26386)
$450.00 add to cart or Buy Direct from Derringer Books
Share this item
Derringer Books
Offered by