THE HISTORY OF PHILOSOPHY: CONTAINING LIVES, OPINIONS, ACTIONS AND DISCOURSES OF THE PHILOSOPHERS OF EVERY SECT 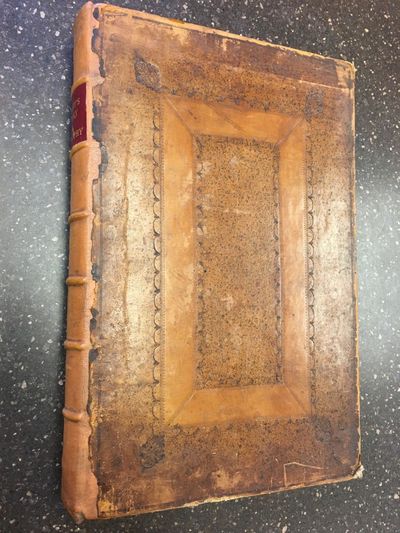 by Stanley, Thomas
London: W. Battersby, 1701. Third Edition. Hardcover. Folio, [36], 633, [4], 63, [1], 636-658, [12]; VG; bound in contemporary speckled leather, hollow rectangle of polished leather with blind tooling in each board; rebacked with 20th century spine, burgundy label with gilt lettering; with 22 illustrated portraits; lacking frontispiece; 'The history of the Chaldaick philosophy' (pts. 14-19) has separate dated title page, with imprint "printed for A. and J. Churchill", and separate pagination.; bookplate of Richard Brinsley Sheridan on front pastedown; ESTC T102824; JW consignment; shelved Above Mythology. Richard Brinsley Butler Sheridan (1751-1816) was an Irish satirist, a playwright and poet, and long-term owner of the London Theatre Royal, Drury Lane. He is known for his plays such as The Rivals, The School for Scandal, The Duenna, and A Trip to Scarborough. He was also a Whig MP for 32 years in the British House of Commons for Stafford (1780-1806), Westminster (1806-1807), and Ilchester (1807-1812). He is buried at Poets' Corner in Westminster Abbey. His plays remain a central part of the canon and are regularly performed worldwide. [wikipedia]. Shelved Dupont Bookstore. (Inventory #: 9-39-1308204)
$800.00 add to cart or Buy Direct from
Second Story Books
Share this item