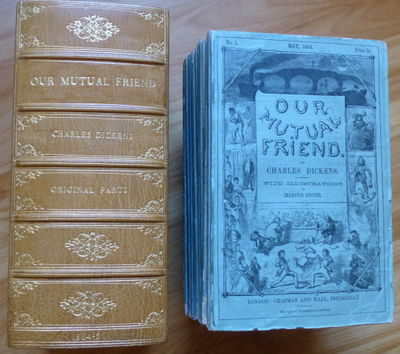 by Dickens, Charles
1864. With Illustrations by Marcus Stone. [In 20-in-19 monthly serial parts.] London: Chapman and Hall, 1864-1865. Original light blue-green wrappers. First Edition of Dickens's last complete novel, in which Greed and The River Thames are two of the principal characters. OUR MUTUAL FRIEND first appeared in these twenty monthly serial parts (the last one being a double-number) from May 1864 through November 1865; it was then published in two volumes (serial readers were encouraged to have their parts so bound up, with the two volumes' preliminary leaves here provided in Parts X and XIX/XX). This set does have the one issue-point in the first state: the lack of the printer's imprint at the bottom of Part I's front wrapper. As Hatton & Cleaver point out, an absolutely-complete set of OUR MUTUAL FRIEND in parts has the most advertising matter of any Dickens novel -- 320 pages of preliminary ads, plus 89 different ads and slips inserted at the rear. This set is remarkably complete -- lacking only the often-missing Economic Life Assurance preliminary inset in Part XIV (though it's present in XIX/XX), and the "At the Bar" preliminary slip in Part XVIII. ALL of the terminal ads are present (though about 1/4 of one leaf is torn away) -- including the uncommon "Foreign Bank Notes" slip in the final part. Condition is overall very good-plus, with most of the parts showing only minor edge-wear and some wear/repair of the paper spines. (The rear wrapper of the final part shows more wear than others; atypically, that is not true of the front wrapper of the first part -- and in fact, the first part's leaves remain unopened.) With the exception of minor foxing on the final part's four plates, all forty plates are clean and bright. Hatton & Cleaver pp 343-370. Housed in an attractive slip-case with full leather spine decorated and paneled in gilt, with inner chemise. (Inventory #: 14151)
$2750.00 add to cart or Buy Direct from
Sumner & Stillman
Share this item