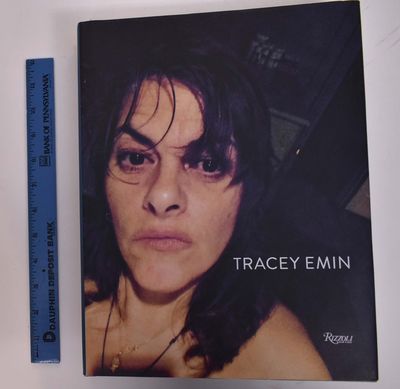 by Jones, Jonathan
New York: Rizzoli, 2017. Hardcover. VG/VG. Gray boards with blue illustration and lettering. Color-photographic dust jacket with white lettering. 399 pp. Mainly color illustrations. "Compiled in close collaboration with the artist and unprecedented in its scope, this definitive book collects ten years of Tracey Emin's drawings, paintings, sculptures, appliqués and embroideries, neons, video stills, and installations. A multimedia artist whose intensely personal work blurs the boundaries between art and life, Emin remains one of the most highly publicized contemporary British artists and continues to stir as much controversy as she has acclaim. Moving chronologically through a prolific decade of work--from major public installations to recent reflective paintings and sculptures--this book shows a coherent vision that defies the idiosyncrasies of Emin's evolution as an artist. The same mixture of anger, hope, curiosity, and vulnerability that informs her delicate drawings and handwritten neon works can be felt in the darker tones of recent monoprints and the weight of later bronze pieces. Written by Jonathan Jones, whose text places Emin's work in a broad art-historical context and sees this recent decade of her artwork as an entry point to examining her full career, this is a beautiful monograph on one of the world's most influential living artists"-Jacket. (Inventory #: 167669)
$65.00 add to cart or Buy Direct from Mullen Books
Share this item

Practical Ship Building: A Treatise on the Structural Design and Building of Modern Steel Vessels, Volume II: Diagrams and Illustrations

by Holms, Campbell A.