FOOLS RUSH IN "... FREELY ADAPTED FROM "THE CRIME OF SYLVESTRE BONNARD" BY ANATOLE FRANCE 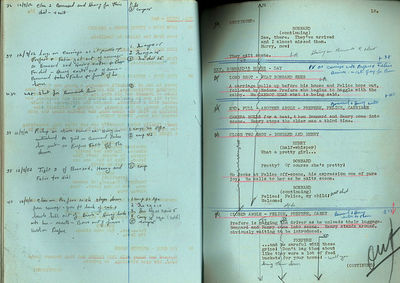 by Lawrence, Jerome, and Robert E. Lee [screenwriters]
Hollywood: ZIV Television Programs, Inc., 1952. [1],44 leaves. Quarto. Mimeographed typescript, printed on rectos only. Bradbound in mimeographed wrappers. Annotated throughout in pencil and colored pencils, ink name, very good. A "Final Master Script" of this adaptation of France's bibliophilic story, prepared by Lawrence and Lee as #5b of the television series to which they would frequently contribute, the FAVORITE STORY series. This script was utilized in the production, and is very, very extensively annotated throughout with camera angles, revisions in dialogue and stage directions, etc. The versos of the majority of leaves bear annotations pertaining to camera p.o.v. and similar data keyed to the facing recto. Accompanied by the 2nd draft (58 leaves dated 11/8/52, incomplete, punched but not bound), and some loose leaves, with occasional annotations. (Inventory #: WRCLIT81028)
$350.00 add to cart or Buy Direct from
William Reese Co. - Literature
Share this item

by [Beats and Others]: Nadeau, Maurice, et al [eds]