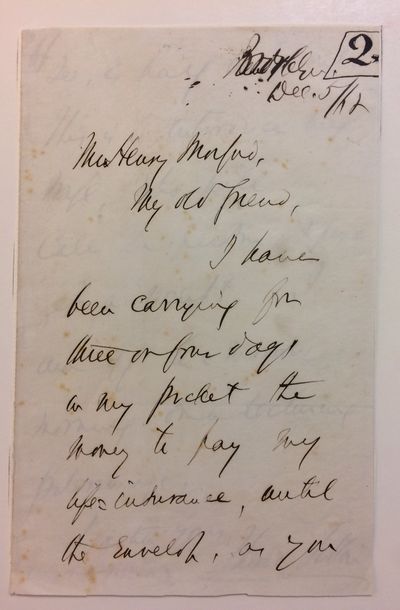 by TILTON, Theodore (1835-1907)
Brooklyn, 1868. unbound. very good(+). A.L.S. 8vo. 2 pages, Brooklyn, New York, December 5, 1868, written while he was an assistant to Henry Ward Beecher, in part: "... I have been carrying for three or four days long in my pocket the money to pay my life insurance, until the eleventh, as you see, is half worn out. This is to introduce my wife, who will call to fetch it and pay and get a receipt. I am off on a lecture program..." *Letters with any mention of Tilton's wife while he was in Brooklyn are extremely scarce. American newspaper editor and abolitionist who unsuccessfully sued Henry Ward Beecher for Adultery (with his wife). Upon Beecher's acquittal, Tilton moved to Paris where he would remain for the rest of his life. (Inventory #: 286412)
$150.00 add to cart or Buy Direct from
Argosy Book Store
Share this item