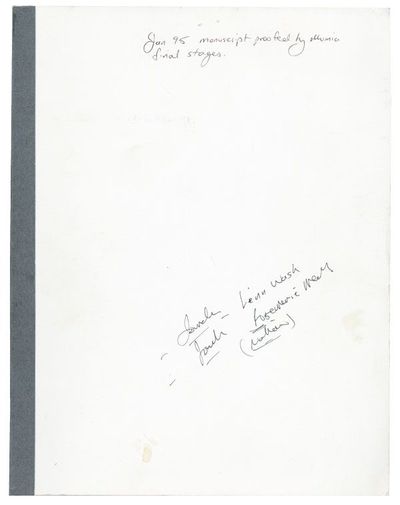 by [AFRICAN AMERICANS][PRISONS] ABU-JAMAL, Mumia (text); WIDEMAN, John Edgar (introduction)
[New York: Addison-Wesley Publishing, 1995]. First Edition. Paperback. Early pre-publication draft of the former Black Panther Party lieutenant's prison memoir. Told in a series of annecdotes, Live From Death Row details Jamal's assessment of prison conditions, along with discussion of social issues and their relevance to the prison system in America. At the time of publication Abu-Jamal was on death row for the murder of Philadelphia police officer Daniel Faulkner, thoughin 2001 his sentence was commuted to life imprisonment without parole. Quarto (28cm); photostatically reproduced tape-bound sheets; xxxix,218pp. Holograph corrections and revisions throughout the text in several hands, including Jamal's (in addition to numerous editorial corrections in facsimile). Holograph notations to front wrapper, including: "Jan 95 manuscript proofed by Mumia / final stages." Some external wear and handling, staple holes and a few faint stains to front wrapper, with pp.xxxviii-xxxiv detached but present; Very Good+. Copy of a TLS (2/1/95) from Jamal's editor, Noelle Hanrahan, to Tiffany Cobb of Addison-Wesley laid in ("I got the page proofs on Friday, and I do think they look great. Mumia also is very pleased with the book. I met with Mumia yesterday, enclosed are the corrections."). Also laid in is a brief ANS from Hanrahan to John Edgar Wideman, dated 1/9/97: "Hi John, I finally found this manuscript. And I thought to include the new book. If you have any questions - let me know. Best toward justice, Noelle Hanrahan." (Inventory #: 38791)
$1500.00 add to cart or Buy Direct from
Lorne Bair Rare Books
Share this item