Lincoln County Lore; From the Journal of Lieut. Theodore Talbot, U.S.A. On His Journey Through Lincoln County and Along the Oregon Coast in 1849. Entries Compiled and Notes on Contents by Leslie L. Haskin, Newport, Oregon. Reprinted from Files of Newport News 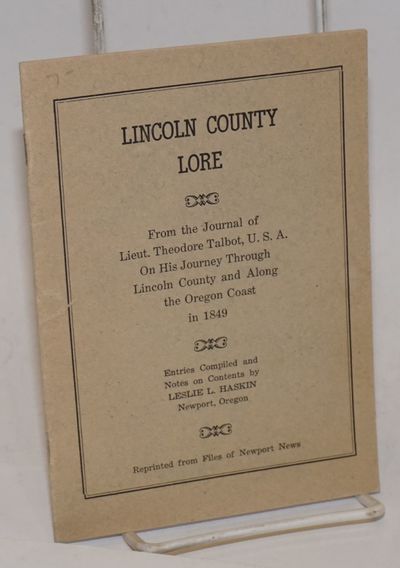 by Talbot, Lieut. Theodore, author; Leslie L. Haskin, compiler
Newport OR: Lincoln County Historical Society, undated, circa 195o. Pamphlet. 14p., small pamphlet in stapled 7x4.5 inch plain printed grey wraps, presswork done on newsprint which while toned remains supple enough to handle. Slight crimpings along spinefold but staples are bright, no ownership or any other markings, a very good copy. Lincoln County Historical Society, publication 1. Two items of interest: "The mountains were enveloped with such a dense mass of smoke, occasioned by some large fires to the south of us, that we could see but little of the surrounding country. These fires are of frequent occurrence in the forests of Oregon, raging with violence for months, until quelled by the continued rains of the winter season.." (p.4; then, from p.6:) "These [unnamed] Indians occasionally visit the Umpquas, with whom they are at peace, for the purpose of buying from them their prisoners, of whom they make slaves. Quite a traffic is thus carried on, the Alsea and Yacona Indians in turn selling these slaves at advanced prices to the Indians living about the Columbia (Inventory #: 229531)
$15.00 add to cart or Buy Direct from Bolerium Books
Share this item

Chicago : The University of Chicago Press , 1981
(click for more details)