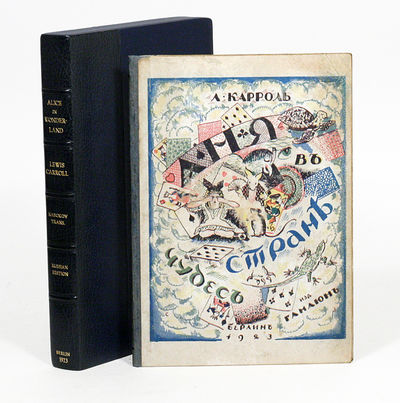 by NABOKOV, VLADIMIR. [SIRIN]. [CARROLL, LEWIS]
Berlin: Izdaterstov Gamayun, 1923. First edition. Original boards. Very Good. SCARCE FIRST EDITION OF NABOKOV'S RUSSIAN TRANSLATION OF ALICE IN WONDERLAND, WITH ILLUSTRATIONS BY ZALSHUPIN. A MAGNIFICENT COPY. Alice's Adventures in Wonder-Land is a brilliant, famous, and (literally) wonder-ful book, but it can also be a difficult book, since today's reader is located over 150 years and (in the case of American readers) some three to six thousand miles from the point in space and time at which the work was published. As a result, Lewis Carroll's jokes are not always readily grasped by the modern reader. What is a comfit? What, applied to beaches, does "shingle" mean? What is a bathing machine? Why did Carroll make the mad tea-party guest a hatter? "You Are Old Father William" is a brilliant parody, but the poem that it parodies is no longer familiar to most readers, even in the English-speaking world. These difficulties are only enhanced when a translator attempts to transpose Carroll's obscure references, sly nudges, and brilliant British word play to a foreign language and an even more foreign culture. Lengthy treatises have been written about the difficulties of translating Alice, including, notably Warren Weaver's 1964 work "Alice in Many Tongues" and, more recently, Oak Knoll Press' "Alice in a World of Wonderlands," in three massive volumes. In 1923 a young Vladimir Nabokov accepted the challenge by translating Alice into Russian. The translation is a marriage made in heaven - an encounter between the greatest Anglophone and Russophone writer of the twentieth century and the author of one of the greatest works of literary imagination of any century. "In the Russian version of his autobiography, Vladimir Nabokov tells us that he translated Alice in Wonderland into Russian during his free-lancing days after returning to Berlin from his studies at Cambridge and that he was paid the sum of five American dollars for the job. In both the English versions of the autobiography (Conclusive Evidence and Speak, Memory) he supplies the additional information that five dollars was 'quite a sum during the inflation in Germany.' The translation, signed with the pen-name Nabokov used during his European period, V. Sirin, was brought out in Berlin in 1923 by an émigré publishing house named after the legendary bird of Russian mythology, Gamaiun. The slim volume was illustrated with S. Zalshupin's drawings (remote and pseudo-cubistic variations on Tenniel)..." (Simon Karlinsky, "Anya in Wonderland: Nabokov's Russified Lewis Carroll", in TriQuarterly, No. 17, 1970). Later in his life, Nabokov would fiercely attack the "miserable paraphrasts" whose translations failed to reflect with the utmost fidelity the precise meaning of the original. In 1923, however, he was a much younger man, and perhaps because of the unique nature of Alice, he felt justified in taking a freer approach. Thus, in order to make the story clearer to Russian readers, he transposed quintessentially British characters, situations, puns, and jokes into approximate Russian equivalents. "Beyond his success with parodies and puns, Nabokov's version of Carroll is remarkable for its beautifully caught and conveyed tone and diction of the original. If it is not the perfect translation it could have been, it is because it does contain pages not equal in imagination and fidelity to what Nabokov had done in the best and most successful passages. Anya in Wonderland, we must remember, was translated by a very young man, working for money and possibly trying to meet a deadline. Still, with a few subsequent revisions, the book could have easily become one of the finest translations of Alice into any language. Even without these revisions, it is by far the best one that exists in Russian. And yet, apart from a few copies in the largest libraries of the Western world, it is also one of the least available versions of Alice" (Karlinsky, op. cit.). (Karlinsky's last sentence is no longer quite true, Dover having since 1970 published an inexpensive paperback facsimile of the translation, but certainly original first-edition copies remain extremely rare.) "[Nabokov's translation] is vigorous and has a degree of freedom that bespeaks a future master. His verse parodies are very funny. In following a well-established tradition he subjects Alice to naturalization and does so consistently through the text. Like other translators of Alice he realizes only too well that no parody could be funny if the originals that it mocks are not known. So he very cleverly substitutes Russian verses for the English ones and then satirizes them (Lermontov's "The Cossack Lullaby" for the Duchess's "Speak roughly to your little boy!"; Lermontov's "Borodino" for "You are old, Father William"; Pushkin's "The Song of the Wise Oleg" for "Tis the voice of the Lobster," for example)" (Nina M. Demurova, "Alice Speaks Russian: The Russian Translations of Alice's Adventures in Wonderland and Through the Looking-Glass", in Harvard Library Bulletin, Winter 1994/1995 issue). Berlin: Izdaterstov Gamayun, 1923. Octavo, original boards and paper spine; front board with full color illustration by Sergei Aleksandrovich Zalshupin; custom half-morocco box. With black-and-white illustrations by Zalshupin throughout. Some fading to spine and toning to boards; mild uniform browning to text (as is expected with this paper stock). A beautiful book; extremely rare in original condition. (Inventory #: 2148)
$24000.00 add to cart or Buy Direct from
Manhattan Rare Book Company
Share this item
Manhattan Rare Book Company
Offered by