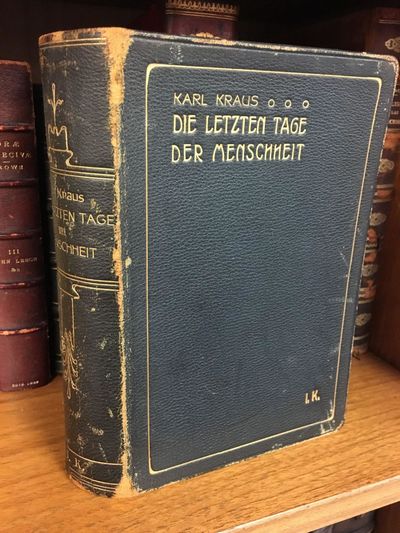 by Kraus, Karl
Wein: Verlag Die Fackel, 1919/1918. First Editions. Hardcover. Octavo, 639, 48 pages; G; bound in a custom monogrammed dark green leather binding, gilt lettering and tooling to spine and front cover; patterned endpapers; moderate wear and rubbing to binding; pages severely age-toned and brittle; with both Die Letzten Tage der Menschheit and Die Letzte Nacht bound together, individual title pages; shelved case 0. Karl Kraus (1874-1936) was an Austrian writer and journalist, known as a satirist, essayist, aphorist, playwright and poet. He directed his satire at the press, German culture, and German and Austrian politics. The Austrian author Stefan Zweig once called Kraus "the master of venomous ridicule" (der Meister des giftigen Spotts). He was nominated for the Nobel Prize in Literature three times. The Last Days of Mankind (German: Die letzten Tage der Menschheit) is a satirical play by Karl Kraus. It is considered one of the most important of Kraus' works. One third of the play is drawn from documentary sources and is highly realistic, except the final scenes which are of expressionist genre. [wikipedia]. Shelved Dupont Bookstore. (Inventory #: 9-33-1308401)
$500.00 add to cart or Buy Direct from
Second Story Books
Share this item