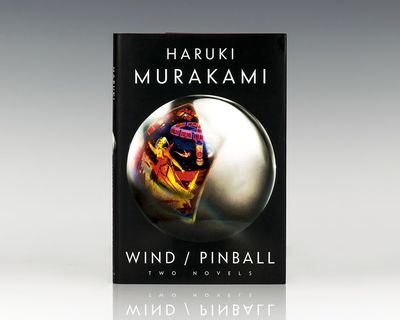 by Murakami, Haruki
New York: Alfred A. Knopf, 2015. First edition of the compilation of Murakami's first two novels. Octavo, original boards. Signed by Haurki Murakami on the half-title page. Fine in a fine dust jacket. Jacket design by Chip Kidd. Translated from the Japanese by Ted Gossen. Three years after Hear the Wind Sing, in 1973, the narrator has moved to Tokyo to work as a translator and live with indistinguishable twin girls, but the Rat has remained behind, despite his efforts to leave both the town and his girlfriend. The narrator finds himself haunted by memories of his own doomed relationship but also, more bizarrely, by his short-lived obsession with playing pinball in J's Bar. This sends him on a quest to find the exact model of pinball machine he had enjoyed playing years earlier: the three-flipper Spaceship. (Inventory #: 60012)
$650.00 add to cart or Buy Direct from
Raptis Rare Books
Share this item