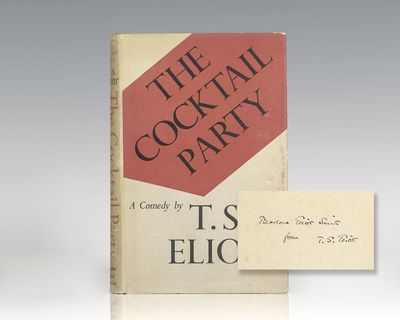 by Eliot, T.S
London: Faber & Faber, 1950. First edition of Eliot's most popular play published in his lifetime. Octavo, original cloth. Association copy, inscribed by the author on the front free endpaper to his niece, "Theodora Eliot Smith from T.S. Eliot." Near fine in near fine dust jacket. A nice association. The Cocktail Party was written while Eliot was a visiting scholar at the Institute for Advanced Study in 1948. It was first performed at the Edinburgh Festival in 1949. In 1950 the play had successful runs in London and New York theaters (the Broadway production received the 1950 Tony Award for Best Play.) It focuses on a troubled married couple who, through the intervention of a mysterious stranger, settle their problems and move on with their lives. The play starts out seeming to be a light satire of the traditional British drawing room comedy. As it progresses, however, the work becomes a darker philosophical treatment of human relations. As in many of Eliot's works, the play uses absurdist elements to expose the isolation of the human condition. In another recurring theme of Eliot's plays, the Christian martyrdom of the mistress character is seen as a sacrifice that permits the predominantly secular life of the community to continue."An authentic modern masterpiece" (New York Post). "Eliot really does portray real-seeming characters. He cuts down his poetic effects to the minimum, and then finally rewards us with most beautiful poetry" (Stephen Spender). (Inventory #: 95677)
$4800.00 add to cart or Buy Direct from
Raptis Rare Books
Share this item