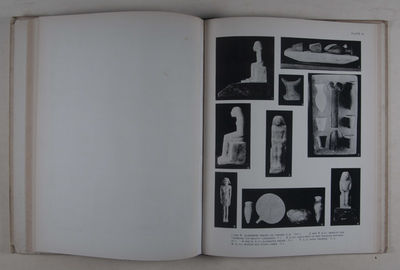 by Naville, Edouard; T. Eric Peet; H. R. Hall; Kathleen Haddon
London: The Egypt Exploration Fund, 1914. First edition. Hardcover. fair to vg. Folio. xii, 54pp., xxi plates; xvi, 133pp., xxxix plates; xi, 54pp., xxvi plates, one folding. Original black pebbled half cloth over gray boards with black lettering on covers, red on spines. "The mixed cemetery of Abydos is one of the most interesting burial-grounds explored in that locality, for we find there tombs of various epochs, and we follow the successive changes which some of them have undergone... This volume [I.] consists in its greater part of the complete and elaborate description of the cemetery made by Mr. Peet, to which I have nothing to add, though I followed closely the excavation. From the first I arrived at conclusions very different from those which are now the base of the dating of funerary monuments, especially in reference to pottery, from what is generally called the historical sequence." (Naville). Illustrated with twelve plates of b/w photographs depicting artifacts and excavations site, eight plates of line drawings and one plate of a plan of the work at Umm El-Ga'ab, 1909-11. "This volume [II.] is designed to deal with all the tomb work done by the Fund in the three seasons 1909-10, 1910-11, and 1911-12, with the exception of the earlier excavations in Cemetery E, which are to form part of another volume, 'Cemeteries of Abydos,' I. a few tombs are added which were excavated in 1912-13, but which did not fit naturally into the scheme of the publication of that year's work, 'Cemeteries of Abydos,' III." (Peet). Illustrated with in-text drawings and plans, twenty-seven plates of b/w photographs depicting artifacts, one plan, and two plates with wall paintings, one with scarabs and seals. "The season of the winter 1912-13 was entirely devoted to excavations in two regions of the Abydos necropoleis [III.]." (Peet). Illustrated with in-text drawings and fifteen plates with b/w photographs of artifacts, nine plates with line drawings of artifacts, one measure drawing, and one folding plate with the plan of Ibis Cemetery. All three volumes with lists of publications advertised on inside back and back covers. Photographs printed to glossy paper. All bindings with library sticker, library bookplates on inside front, library index card in one, and two volumes with library pockets on inside back covers. All with library stamps to top and bottom edges. Bindings with wear along edges, small chips and bumps, some smudging and rubbed. plates with b/w photographs of volume III. with yellowing of photographic plates in margins, not affecting images. Bindings in overall fair to good-, interiors in good+ to very good condition. (Inventory #: 44531)
$400.00 add to cart or Buy Direct from
Eric Chaim Kline Bookseller
Share this item