The Sixth Book of the Select Letters of Severus, Patriarch of Antioch, in the Syriac Version of Athanasius of Nisibis. 2 Vols 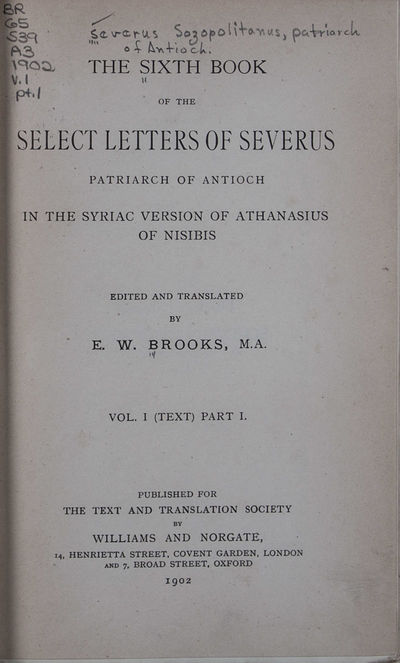 by Brooks, E. W. (ed., transl.)
London: Williams and Norgate, 1904. Ex-Library First edition. Hardcover. g- to vg. Small Quarto. ix, 259 (1), vii, 261-530pp. Original blue cloth with blind-stamped border and gilt lettering on spine. Published for The Text and Translation Society. "The letters of Severus of Antioch, lost except for a few fragments in Greek, are partly preserved in at least three Syriac versions. Of these two exist only in isolated letters or fragments; but of the third, that of Athanasius of Nisibis, made in AS 980 (AD 669), we have the 6th book almost entire in two Brit. Mus. MSS, Add. 12,181 (A) and Add. 14,600 (B), both written in an Estrangela hand of the 8th cent." (Introduction). Text in Syriac. Library barcodes and stickers in binding, library bookplates on inside, library index card and pocket with numeric stamp on inside back covers. Bindings with light wear along edges, light bumps at corners and light fraying at head and tail of sunned spines. Library stamps on verso of title pages and first pages of Syriac text. Previous owner's name inked to front free endpaper of part II. Block uncut at bottom and foredge. Bindings in overall good-, interior in very good condition. (Inventory #: 44518)
$150.00 add to cart or Buy Direct from
Eric Chaim Kline Bookseller
Share this item