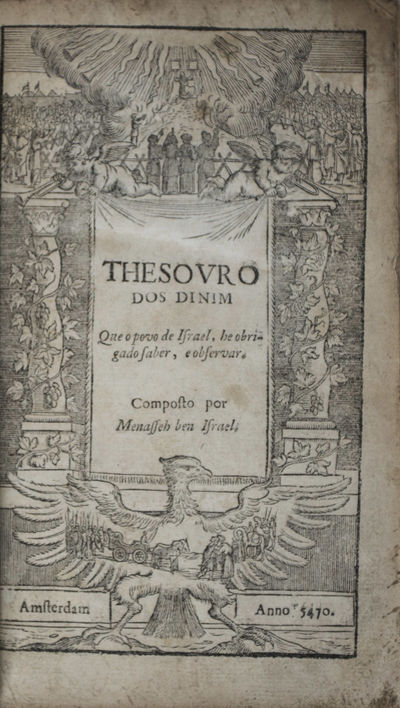 by ben Israel, Manasseh
Amsterdam: NP, 5470. Hardcover. g+ to fine. Small octavo. 7.5x5". [5] 201pp. [4]. Rebound in modern dark brown leather boards, with blind-stamped tooling on the covers. Gilt lettering and ruling on the spine. In four parts, each with its own title page. The initial title page is illustrated by detailed woodcuts of biblical scenes (including the giving of the torah) and decorative motifs. There are four additional title pages throughout the text (separating parts) each framed by decorative woodblock motifs and including a vignette of a winged face. The originally dedication pages from the first edition are reproduced here, with the final part having its own dedication section, dated "5407" [1647]. The work, compiled, written and originally published by famed Rabbi and printer Menasseh ben Israel is a compendium and comprehensive guide of Jewish holidays, practices and observances throughout the year, organized into five parts. Originally dating from 1645-1647, the book was produced, as stated by the author, "for the use of our Portuguese Nation", and was specifically geared towards the Jewish education of the newly established Sephardic (specifically Portuguese) diaspora community. A significant portion of the Sephardic community in Amsterdam would have been ex-marranos/conversos (Jews, who had outwardly converted to Catholicism during the inquisition in Spain, who then immigrated and were able to reestablished their Jewish identity, aka former "New Christians"), and thus were unable to read Hebrew, hence the text's publication in Portuguese. Topics range widely from holidays, prayer services, and dietary practices to Sabbath observance, and marriage practices. The final section contains 4 pages of table of contents.Text in Portuguese with a few lines in Hebrew.Interior with varying degrees of minor to light worming to the bottom corners of the pages from p.9-91, resulting in occasional minor loss of text. Initial title-page with a few small tears and holes towards the top, only affecting the images minimally. There is a 1.5" tear at the corner of p.1. Water stains and smudges to pages throughout. The final 4 pages (table of contents) have holes, and have been been repaired with tissue, resulting in some loss of text. Binding in fine, interior in good+ to very good- condition overall. *Menasseh ben Israel (1604 - 1657) was a Portuguese rabbi, kabbalist, writer and publisher. He founded of the first Hebrew-language printing press, "Emeth Meerets Titsma`h" in Amsterdam in 1626. He many accomplishments included his diplomatic work on behalf of reinstating the Jews permission to resettle in England during the Oliver Cromwell period, his pioneering work in the publishing of Jewish books in Northern Europe, and what is considered his magnum opus, "Nishmat Hayim", a treatise in Hebrew on the Jewish concept of reincarnation of souls. Rembradt who was a friend, is known to have done a portait etching of the Rabbi in 1636.Reference: For the first edition, KAYSERLING (1890). p.69, under Menasseh ben Israel. This edition not in KAYSERLING. (Inventory #: 44506)
$1250.00 add to cart or Buy Direct from
Eric Chaim Kline Bookseller
Share this item