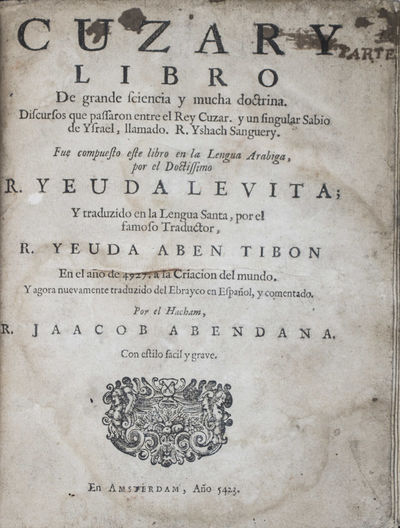 by Halevi, Judah; Judah ibn Tibbon (trans. by); Jacob Abendana (trans. by)
Amsterdam: [Jacob Abendana], 5423. First Spanish language edition. Hardcover. vg to fine. Octavo. 306pp. Finely rebound in modern dark brown leather boards, with blind-stamped ruling and tooling on the covers and spine. Gilt lettering on the spine. Title page illustrated with a decorative woodcut vignette. This is believed to be the first Spanish-language edition of the famed work by Judah Halevi, originally written in Judeo-Arabic circa 1140 in Spain. The work was first translated from the Judeo-Arabic into Hebrew by the renowned scholar Judah Ibn Tibbon circa 1167, and then much later from the Hebrew to the Spanish in this edition by Jacob Abendana. The work, which takes the form of a supposed dialog between Rabbi Yitzhak ha-Sangari and the pagan King of the Khazars, is divided into five parts. According to tradition, these discussions ultimately lead to the conversion of the Khazars to Judaism, and the work is considered to be an important in the examination of Jewish philosophical concepts and as a defense of religious doctrine. The main text is accompanied by running scholarly commentary below from Abendana, in a smaller typeface. There is also sporadic Hebrew text in a few passages throughout. Errata at the bottom of the final page. Text in Spanish.Laid in at the interior front cover is a 19th century double-sided manuscript in French from a previous owner. The manuscript is quoted from Salomon Munk's discussion/summary of the Kuzari, taken from a published piece in the French-Jewish periodical "Archives Israelites". Interior with some period ink stains to the title page and some sporadic light water stains to some pages throughout. Binding in fine, interior in very good condition overall. Jacob Abendana (1630-1685) was a Spanish-born Dutch rabbi and scholar, and a leading member of Amsterdam's Jewish community. Having previously published other works of Judaica with his brother Isaac Abendana, this translation and commentary on the Kuzari is seen as stemming from a long running correspondence and ongoing debate that he had with Christian scholar Anton Hulsius. Later in 1680 Abendana moved to London where he served as a leader of the Sephardic community there, and a Rabbi of the congregation that would become the Bevis Marks Synagogue.Reference: KAYSERLING, p.1-2 (under Abendana). (Inventory #: 44499)
$3000.00 add to cart or Buy Direct from
Eric Chaim Kline Bookseller
Share this item