AUTOGRAPH LETTER SIGNED, PHILADELPHIA, 4 MARCH 1811, FROM WILLIAM DUANE TO AN UNKNOWN RECIPIENT DISCUSSING TURMOIL IN THE MADISON WHITE HOUSE: "... IT IS IMPOSSIBLE TO MISTAKE THE OPERATION OF MEASURES AS THEY ARE NOW GOING ON. MR. MADISON'S HOUSE IS A SCENE OF ODIOUS INTRIGUE. WASHINGTON A SCENE OF DISSIPATION AND EXTRAVAGANCE WHICH THOSE WHO HAVE SEEN THE COURTS OF EUROPE SAY THEY DO NOT EQUAL. IN THE CABINET, MR. GALLATIN WITH ALL THE POWERFUL AND FLEXIBLE FACULTIES WHICH HE POSSESSES AND KNOWS SO DEXTEROUSLY TO APPLY ON ONE SIDE; THE SMITHS WITH AN EQUALLY POWERFUL INFLUENCE... BETWEEN THEM MR. MADISON IS LIKE A MAN WITH HIS HEAD IN A NOOSE, AND THESE PARTIES HOLDING EACH OF THEM AN END OF THE ROPE--HE MUST SELECT OR PERISH BETWEEN THEM. . . . IT IS WELL KNOWN AT THE PRESD'TS HOUSE THAT THE SMITHS HAVE BEEN CONCERNED IN AN INTRIGUE AGAINST MR. M." SECRETARY OF THE NAVY PAUL HAMILTON "HAS BEEN SICKENED TO THE SOUL TO SEE WHAT HE HAS SEEN. THESE THINGS AND A THOUSAND OTHERS HAVE MADE ME ALMOST DESP 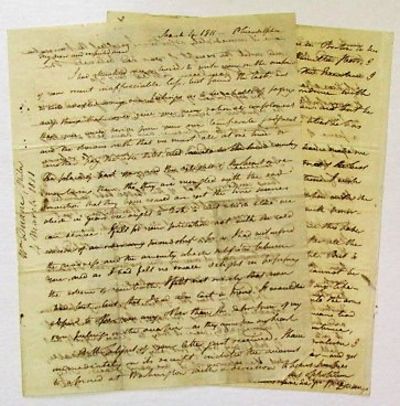 by Duane, William
9 3/4" x 7 3/4". [4] pp, on two loose leaves of unlined paper, completely in ink manuscript. Small corner chip to first leaf [one letter barely touched upon]. Thin strip of mounting tape in margin of final page just touching signature. The paper is quite thin, resulting in some show-through to the reverse side of each page. Else Very Good. Docketed in left margin of first page, "Wm. Duane, Phila, 4 March 1811." William Duane (1780-1865), Philadelphia newspaperman, was the prominent editor of 'The Aurora', the most influential of the Jeffersonian periodicals. Written on the eve of the War of 1812, Duane's letter analyzes the chaos his sources had described within James Madison's White House. He begins by expressing his sorrow for an unexplained loss that his recipient has endured. Duane then discusses his relief that the 1791 Charter of the Bank of the United States has expired; Duane had, according to this letter, experienced some difficulties with the Bank regarding his own finances. Ironically, Duane would serve briefly as Andrew Jackson's Treasury Secretary in 1833. Jackson fired him when Duane refused to obey Jackson's order to remove the federal deposits from the second Bank of the United States. Albert Gallatin, discussed in this letter, was the longest-serving Secretary of the Treasury: President Jefferson appointed him, and he served an uninterrupted tenure through both administrations of James Madison. The Smiths to whom the letter refers were Secretary of State Robert Smith and his brother Senator Samuel Smith. (Inventory #: 35298)
$1,750.00 add to cart or Buy Direct from
David M. Lesser, Fine Antiquarian
Share this item
David M. Lesser, Fine Antiquarian Books LLC
Offered by