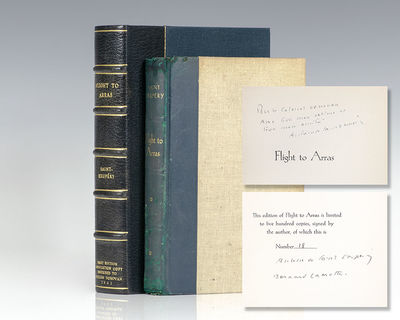 by Saint-Exupery, Antoine de
New York: Reynal & Hitchcock, 1942. Signed limited edition one of 500 copies, additionally inscribed by Saint-Exupery. Octavo, original half leather, gilt titles to the spine, top edge gilt. Additionally inscribed on the half-title page (translated from the French), "For Colonel Donovan, With all my esteem and all my friendship. Antoine de Saint-Exupery." The recipient William Joseph "Wild Bill" Donovan was an American soldier, lawyer, intelligence officer and diplomat. He is best remembered as the wartime head of the Office of Strategic Services (OSS), the precursor to the Central Intelligence Agency, during World War II. He is also known as the "Father of American Intelligence" and the "Father of Central Intelligence." The CIA regards Donovan as its founding father, according to journalist Evan Thomas in a 2011 Vanity Fair profile. In the article Thomas observed that Donovan's "exploits are utterly improbable but by now well documented in declassified wartime records that portray a brave, noble, headlong, gleeful, sometimes outrageous pursuit of action and skulduggery." A statue of him stands in the lobby of the CIA headquarters building in Langley, Virginia. A veteran of World War I, Donovan is the only person to have received all four of the United States' highest awards: The Medal of Honor, the Distinguished Service Cross, the Distinguished Service Medal, and the National Security Medal. He was also a recipient of the Silver Star and Purple Heart, as well as decorations from a number of other nations for his service during both World Wars. Translated from the French by Lewis Galantiere. Illustrations by Bernard Lamotte. Housed in a custom half morocco clamshell box. Based on one of Saint-Exupery's 1940 reconnaissance missions, "Arras is a deeply personal book... Conceived as a volume on the fall of France, Flight to Arras was a war book by the time it was published. It won raves on both counts. It was universally thought to dwarf all other accounts of the French defeat; writing in the Atlantic Edward Weeks declared, 'This narrative and Churchill's speeches stand as the best answer the democracies have yet found to Mein Kampf" (Schiff, 363). (Inventory #: 89335)
$6,500.00 add to cart or Buy Direct from
Raptis Rare Books
Share this item