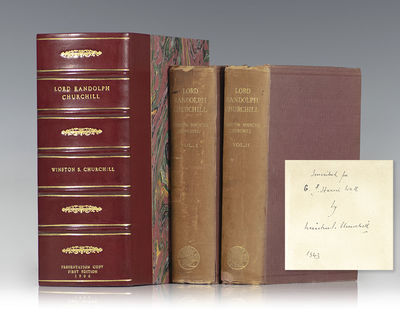 by Churchill, Winston
London: Macmillan & Co. Limited, 1906. First edition of Winston S. Churchill's biography of his father. Octavo, 2 volumes, original cloth, with two photographic frontispiece portraits of Lord Randolph. Presentation copy, inscribed by the author on the front free endpaper in both volumes, "Inscribed for G.S. Harvie-Watt by Winston Churchill 1943." The recipient, Harvie-Pratt was a conservative politician who served as parliamentary private secretary to Winston Churchill from 1941-1945. At the end of World War II, he became a Queen's Counsel and was created a baronet. In 1948 he became an aide-de-camp to George VI; on the king's death, he filled the same position for Elizabeth II, also acting as a member of the Queen's Body Guard for Scotland. In very good condition with rubbing and wear to the extremities. Housed in a custom half morocco clamshell box. Remarkable association copies. Outside Parliament, Churchill devoted much of his time during 1904 and 1905 to compiling a biography of Lord Randolph. He was motivated in part by a desire for an intimate knowledge of his father that had been denied him during Lord Randolph's lifetime... When the book emerged in 1906, it was widely hailed as one of the best political biographies in English and its prose style is still greatly admired today... Contemporary readers were struck by the frankness and openness of the account, contrasting favorably with the pious acts of homage served up as biography by other sons of famous fathers. It was, after all, a study in failure rather than success. The writing of the biography marked the point at which Churchill at last outgrew his father's memory" (Grant, 47). (Inventory #: 30055)
$9,500.00 add to cart or Buy Direct from
Raptis Rare Books
Share this item