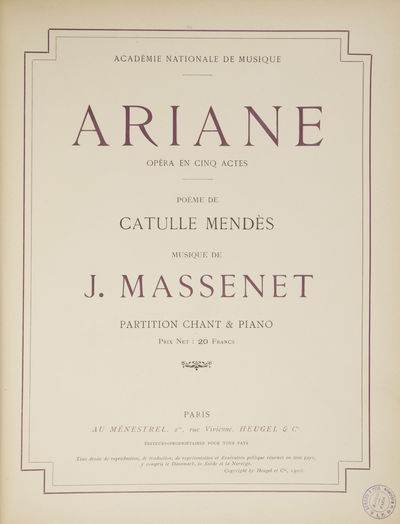 First performed in Paris on October 31, 1906, under the direction of M. P. Gailhard.

"Ariane was designed on a grand scale and grandly staged at the Opera in 1906. Catulle Mendès's libretto treats Theseus's flight from Crete with Ariadne as well as her sister Phaedra, with whom he falls in love. Its success was largely built on the fourth act, in which Ariadne descends to the underworld to plead with Persephone to restore her dead sister. Lucy Arbell, from then on to be closely associated with Massenet's operas, made a great impression in the role of Persephone, especially with her aria 'Des roses, des roses', a late addition to the score. The third act, in which Ariadne pleads with Phaedra to intercede with Theseus on her behalf, is scarcely less touching. Of all the many operas on the Theseus myth, this is one of the few to include Phaedra and to dramatize the rivalry of the two sisters for Theseus's love."

["Massenet] was the most prolific and successful composer of opera in France at the end of the 19th century and into the beginning of the 20th." Annegret Fauser, Patrick Gillis and Hugh Macdonald in Grove Music Online. (Inventory #: 29920)
$182.00 add to cart or Buy Direct from
J. & J. Lubrano Music Antiquarians
Share this item