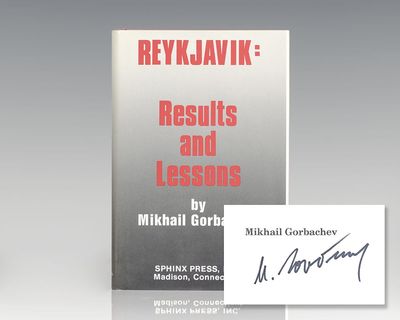 by Gorbachev, Mikhail
Madison, Connecticut: Sphinx Press, Inc, 1987. First edition of this collection of speeches and writings of the historic meeting in Reykjavik between Gorbachev and President Reagan. Octavo, original cloth. Boldly signed by Mikhail Gorbachev on the title page. Fine in a fine dust jacket. The Reykjavik Summit was a summit meeting between U.S. President Ronald Reagan and General Secretary of the Communist Party of the Soviet Union Mikhail Gorbachev, held in Hofdi in Reykjavik, on 11-12 October 1986. The talks collapsed at the last minute, but the progress that had been achieved eventually resulted in the 1987 Intermediate-Range Nuclear Forces Treaty between the United States and the Soviet Union. In 1986, Gorbachev had proposed banning all ballistic missiles, but Reagan wanted to continue research on the Strategic Defense Initiative (SDI), which involved the militarization of outer space. Yet Soviet suspicion of SDI continued, and U.S.-Soviet relations - already strained by the failure of the Geneva Summit the previous year[citation needed] - were further strained by the Daniloff-Zakharov espionage affair. At Reykjavik, Reagan sought to include discussion of human rights, emigration of Soviet Jews and dissidents, and the Soviet invasion of Afghanistan. Gorbachev sought to limit the talks solely to arms control. The Soviets acceded to the "double-zero" proposal for eliminating INF weapons from Europe, as initially proposed by President Reagan in November 1981 (INF denoting "Intermediate-Range Nuclear Forces" as distinct from ICBMs, or intercontinental ballistic missiles). The Soviets also proposed to eliminate 50% of all strategic arms, including ICBMs, and agreed not to include British or French weapons in the count. All this was proposed in exchange for an American pledge not to implement strategic defenses for the next ten years, in accordance with SALT I. The Americans countered with a proposal to eliminate all ballistic missiles within ten years, but required the right to deploy strategic defences against remaining threats afterwards. Gorbachev then suggested eliminating all nuclear weapons within a decade. Gorbachev, however, citing a desire to strengthen the Anti-Ballistic Missile Treaty (ABM Treaty), added the condition that any SDI research be confined to laboratories for the ten-year period in question. Reagan argued that his proposed SDI research was allowed by any reasonable interpretation of the ABM treaty, and that he could not forget the pledge he made to Americans to investigate whether SDI was viable. He also promised to share SDI technology, a promise which Gorbachev said he doubted would be fulfilled, as the Americans would not even share oil-drilling technology. Some, including Reagan staffer Jack F. Matlock Jr., attribute Reagan's refusal to compromise on SDI testing to a mistaken belief that the proposed restrictions would be detrimental to the program, whereas in reality, Matlock contends, they would have had little effect on research that was still in its very early stages. The talks finally stalled, Reagan asking if Gorbachev would "turn down a historic opportunity because of a single word", referring to his insistence on laboratory testing. Gorbachev asserted that it was a matter of principle, and the summit concluded. (Inventory #: 95984)
$975.00 add to cart or Buy Direct from
Raptis Rare Books
Share this item