ATTENTION ATTENTION ROT HAS RECENTLY RETURNED SAFELY & SUCCESSFULLY FROM A PRIVATEERING PIONEERING EXPEDITION INTO THE ARCHAIC LAYERS OF THE MIND ... . NOW TO BE SEEN AT JUDSON GALLERY ... [caption title] 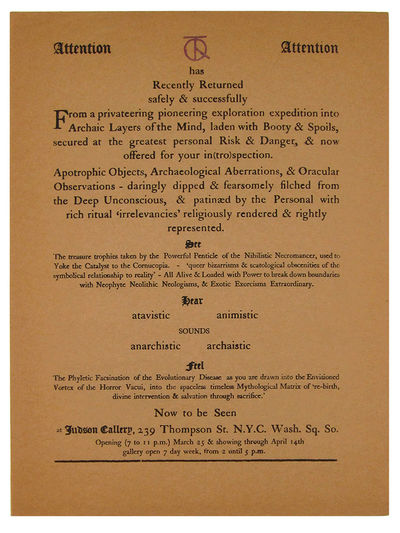 Early broadside of the Uranian Press, advertising founder Richard Tyler's first exhibition at Judson Gallery, March 25 - April 14, 1960. An April 6 review in the VILLAGE VOICE points to "pages from his Uranian Press folios and chapbooks ... . Here too are stark and striking woodcuts in the manner of Mexico's great Posada, aptropaic [sic] icons, giant paintings, and collages set off by fantastic hand-worked frames. Prices range from 30 cents for broadsides up to $1000 for a collage." Richard Oviet Tyler (1926-1983) established the Uranian Press in 1958 in the basement of a tenement on the Lower East Side where, by 1960, he had installed four printing presses. Under the Uranian imprint, Tyler, his wife, Dorothea Baer Tyler, and friends produced chapbooks, broadsides, and artist's books through the mid-1960s. Tyler was a fixture in Greenwich Village during this period, selling the Press's wares from a pushcart in the yard of Judson Memorial Church, a nod to both contemporary Jewish peddlers of the Lower East Side and the chapmen of Elizabethan England. He played an important, if still underappreciated, role in the nascent expanded arts movements of the New York avant garde scene with both the Press and its performance arm, the Uranian Alchemical Players. The Uranian circle expanded into a quasi-religious collective incorporating Jungian and Gnostic ideas of creativity and consciousness, LSD, Western astrology, alchemy, Tibetan Buddhism, and the political thought of Charles Fourier, becoming known officially in 1974 as the Uranian Phalanstery. OCLC records no copies. (Inventory #: 694)
$175.00 add to cart Available from
Baker Rare Books
Share this item

7 day return guarantee, with full refund including original shipping costs for up to 7 days after delivery if an item arrives misdescribed or damaged. Items must be returned in the same condition in which they were received.
More from this seller

ON THE GHOSTLY ALL HALLOWED EAV CREEPING SQUEEKING SNEEKING IN OLD RAGES THE GUESTS OF THE KOKOON SPOOKES WILL ASSEMBLE IN THEIR DEN WHERE THEY WILL HALLUCINATE TO THE WOOZY WAIL OF SPECTRAL SPOOKY OLD MAN HALLOWEEN ... [caption title]

[Cleveland, Ohio] [1926]
(click for more details about ON THE GHOSTLY ALL HALLOWED EAV CREEPING SQUEEKING SNEEKING IN OLD RAGES THE GUESTS OF THE KOKOON SPOOKES WILL ASSEMBLE IN THEIR DEN WHERE THEY WILL HALLUCINATE TO THE WOOZY WAIL OF SPECTRAL SPOOKY OLD MAN HALLOWEEN ... [caption title])
View all from this seller>