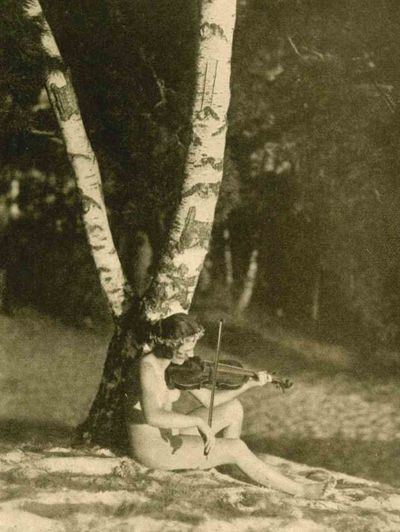 A complete run in 64 issues (lacking issue no. 9 of Year 3 and issue no. 9 of Year 4), bound in six volumes, of the German nude culture journal, under the editorial direction of Magnus Weidemann, a pastor, photographer, and nudist, each issue containing essays on nudity and the naturistic movement, poetry, and other writings. Illustrated throughout with reproductions of artwork and photographs by Weidemann, Lotte Herrlich, G. Riebicke, Germaine Krull, and others. Front endpapers of each volume stamped "Archiv Manfred Jordan", some pencil notations to back inside cover of first volume. 8vo. Cloth-backed marbled boards, issues bound in, a few with original wrpps. Egestorf 1923-1929. Year VI bound together with four issues of Körperbildung Nacktkultur: Blätter Freier Menschen and a single issue of Leben und Sonne: Zeitschrift der Freien Körperkultur. Die Freude was an important publication of the German Freikörperkultur (FKK), or Free Body Culture, movement. FKK endorsed a naturistic approach to community living and the joy of nudity as being without shame and unrelated to sexuality. The German nudist movement was the first worldwide and marked the start of an increased acceptance of public nudity in Germany. The first FKK club was founded in Essen in 1898, and the first nude beach in Germany was established in 1920. Die Freude also includes photographs by Lotte Herrlich, often regarded as the most important female photographer of the German naturistic movment. This is a very scarce complete run of a journal documenting a landmark movement in Germany; as of October 2018, WorldCat locates only three holdings in North American institutions. (Inventory #: 48968)
$4500.00 add to cart or Buy Direct from
Bernett Penka Rare Books
Share this item