[RUSSIA] Moscovy. Corrected from ye Observations communicated to the Royal Society of London and Paris 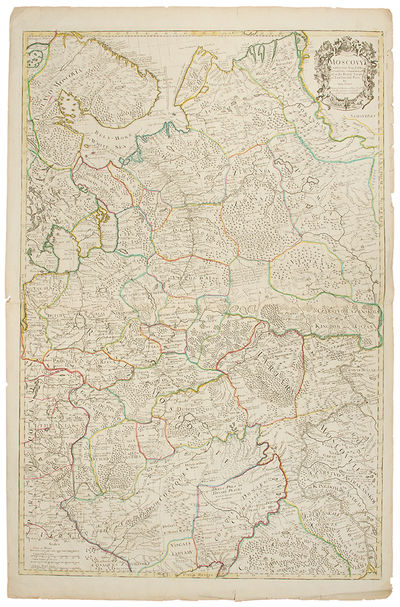 by SENEX, John (1678 - 1740)
[London]: Thomas Bowles, John Bowles & Son, Robt. Sayer, 1712. Engraved with contemporary outline color, small marginal tears. Large, handsome and interesting map of Russia at the time of Peter the Great An attractive double folio sized map of European Russia by the great English cartographer, John Senex (1678-1740). Russia was continually expanding during this period in virtually every direction, though the expansion westward was always more costly. The map notes "Petersburg", which was Peter the Great's most prized accomplishment, giving Russia access to the Baltic and a new, more "European" capital. There would ultimately be more territory added to the northwestern boundary, which was won after years of struggle with Sweden and the Poland-Lithuania Commonwealth. The map extends to the Sea of Azov in the south to include Ukraine, called here "Ukraine Land of the Cosaques" and several regions farther south and east called "Cosaques Zaporoski" and "Cosaques Donski". The map was made during the reign of Peter the Great, who, while the country was growing territorially, advanced European ideas and manners, despite the recalcitrant Orthodox hierarchy. The very idea of nationhood was new to Russia and the country in a generally reluctant way began to modernise. Nevertheless, the map notes the location of many monasteries, which indicates how important and pervasive the old religion was. Senex also provides interesting historical notes, for example, "Deserts where are the ruins of many Citys (sic) and Towns destroyed by Tamerlan" not far from the Volga River. (Inventory #: 29091)
$1500.00 add to cart or Buy Direct from
Donald A. Heald Rare Books
Share this item
Donald A. Heald Rare Books
Offered by