An Oration delivered on the Battlefield of Gettysburg, (November 19, 1863,) at the Consecration of the Cemetery Prepared for the Internment of the Remains of those who fell in Battles of July 1st, 2d, and 3d, 1863 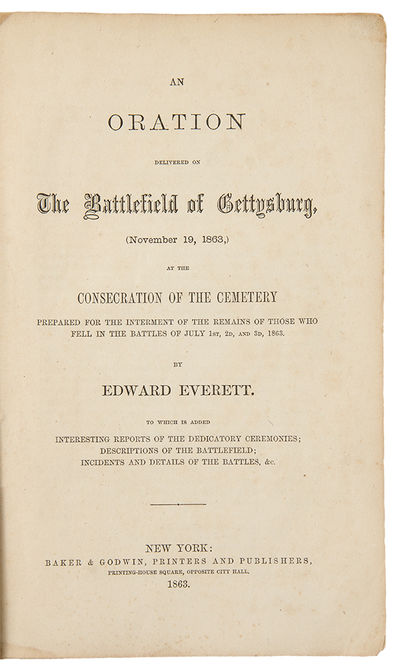 by LINCOLN, Abraham (1809-1865); and Edward EVERETT (1794-1865)
New York: Baker & Godwin, 1863. 8vo. (9 x 5 5/8 inches). 48pp. Publisher's lettered wrappers, publisher's ad on rear wrapper. Housed in a blue morocco box. "Four score and seven years ago...": the earliest publication of the Gettysburg Address in book form, preceded only by the exceptionally rare sixteen-page pamphlet, The Gettysburg Solemnities, known in only three copies. Lincoln made his speech at the dedication of a cemetery on the Gettysburg battlefield some four months after the bloody and pivotal battle that turned the tide of the Civil War in favor of the Union. Lincoln's speech was preceded by an address from Edward Everett, the most famous orator of his day. Everett's speech took some ninety minutes to deliver, and is largely forgotten. Lincoln's speech, delivered in only a few minutes, is immortal. It is a supreme distillation of American values, and of the sacrifices necessary for the survival of liberty and freedom. "The Washington Chronicle of 18-21 November reported extensively on this ceremony and included a verbatim text of 'Edward Everett's Great Oration.' On the fourth day it noted in passing that the President had also made a speech, but gave no details. When it came to the separate publication on 22 November, Everett's 'Oration' was reprinted from the standing type, but Lincoln's speech had to be set up. It was tucked away as a final paragraph on page 16 of the pamphlet [The Gettysburg Solemnities]. It was similarly treated when the meanly produced leaflet was replaced by a 48-page booklet published by Baker and Godwin of New York in the same year" (PMM). Lincoln's address appears on page 40, and parenthetical notes are added indicating "applause" and "long-continued applause." A diagram on page 32 gives the details of the Soldiers' National Cemetery at Gettysburg. A lovely example in original wrappers. Howes E232, "b"; Monaghan 193; Grolier, American 100, 72 (note); Streeter Sale 1747; Sabin 23263; cf. Printing and the Mind of Man 351; Garry Wills, Lincoln at Gettysburg, pp.191-204. (Inventory #: 32764)
$60000.00 add to cart or Buy Direct from
Donald A. Heald Rare Books
Share this item
Donald A. Heald Rare Books
Offered by