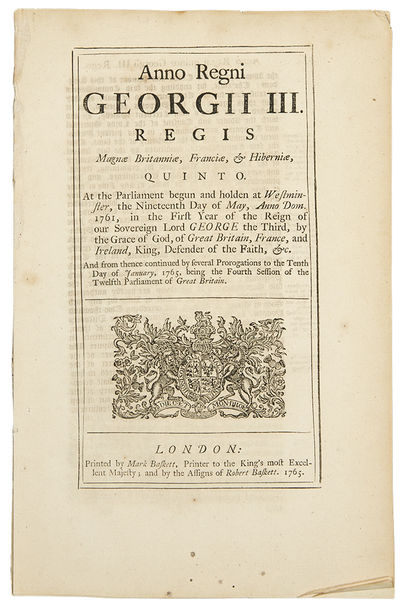 by [AMERICAN REVOLUTION] - Great Britain, Act of Parliament
London: Mark Baskett, 1765. Folio. (12 x 7 7/8 inches). [2], 279-310pp. 5 George III, cap. XII. Disbound. Housed in a blue full morocco box. Very rare first official printing of the Stamp Act: an exceptionally important document in American history. The passage of the Stamp Act was one of the signal events in the history of the United States. After its successful effort in the French and Indian War, the British government was saddled with a massive debt. Added to this was the cost of administering its new lands in Canada, and the necessity of protecting colonists on the American frontier from Indian attacks. In order to raise funds for border defenses, the British Parliament decided to levy a tax directly on the colonists, rather than relying on colonial legislatures to raise the funds themselves. Over the protests of colonial agents in London, including Benjamin Franklin from Pennsylvania and Jared Ingersoll of Connecticut, a tax was levied on all legal and commercial papers, pamphlets, newspapers, almanacs, cards, and dice. Nine pages in the present act are taken up with descriptions of what type of printed materials would be subject to the tax. A Stamp Office was created in Britain, and Stamp Inspectors were to be assigned to each colonial district. Colonists wishing to purchase or use any of the materials covered in the Act would be required to buy a stamp. The outrage in the colonies at this form of taxation was immediate and overwhelming, and the Stamp Act was repealed in 1766. The bitterness engendered by the Act lingered on, and, coupled with subsequent British laws including the Intolerable Acts and the Townshend Acts, became some of the many grievances enunciated in the Declaration of Independence. "This is the original folio edition of the famous (or infamous) Stamp Act, by which the American colonies were taxed in and on their business papers" (Church). "The importance of this act to our history needs no comment" (Streeter). Sabin and Howes note an octavo edition of sixty-six pages, also printed by Baskett in London in 1765. This momentous law was reprinted several times in the American colonies in 1765, in editions in Boston, New York, Philadelphia, Annapolis, New London, and Woodbridge, New Jersey. Sweet & Maxwell II:176; Church 1054; Stevens 6; Howes A285; Sabin 1606. (Inventory #: 35551)
$27500.00 add to cart or Buy Direct from
Donald A. Heald Rare Books
Share this item
Donald A. Heald Rare Books
Offered by