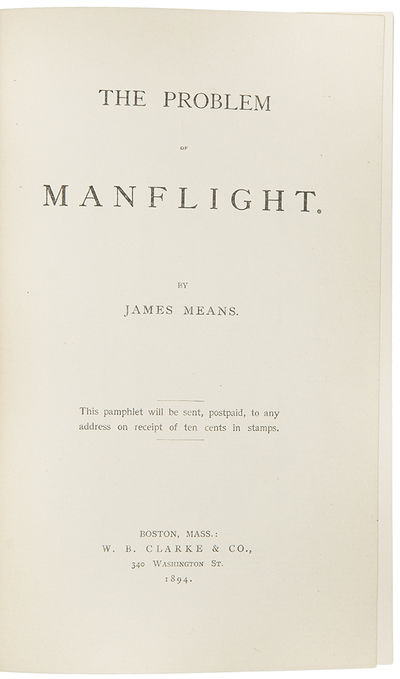 by MEANS, James (1853-1920)
Boston: W.B. Clarke & Co, 1894. 8vo. 20pp. Publisher's wrappers An early work on manned flight by a pioneer who influenced the Wright Brothers. A shoe manufacturing industrialist from Dorchester, Massachusetts, Means would become the founder of the Boston Aeronautical Society and the publisher of the 1895-1897 American Aeronautical Manuals, a journal which would have a profound influence on the Wright Brothers. The present work, published seven years before the Wright Brothers flight at Kitty Hawk, reviews the principles of flight, including lift, tacking, angle of descent, etc. and includes an image of Otto Lilienthal's 1893 glider flight on the upper wrapper. Importantly, the work gives the results of Means's own experiments launching unmanned "soaring machines" from the tower of Boston Light. The work concludes with the statement: "Aerial transit will be accomplished because the air is a solid if you hit it hard enough." Means' extensive collection of works on aviation, as well as his correspondence and photographs, are housed at the Smithsonian National Air and Space Museum. Also at the Museum is the Wright Brothers copy of this pamphlet. Randers-Pehrson & Renstrom 97; Library of Congress, Dream of Flight 111. (Inventory #: 35831)
$1600.00 add to cart or Buy Direct from
Donald A. Heald Rare Books
Share this item
Donald A. Heald Rare Books
Offered by