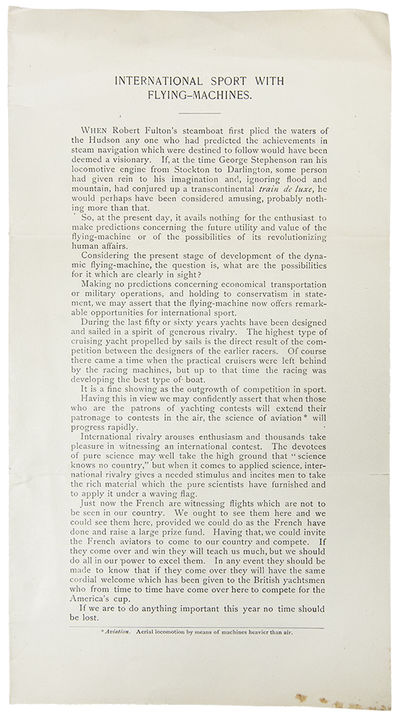 by AVIATION - James MEANS; Alexander Graham BELL; Octave CHANUTE and A. Lawrence ROTCH
Boston, 1908. 3pp., tall folded bifolium. Early aviation ephemera. Inspired by a similar aviation prize having been issued in France and by the technical improvements resulting by international yachting competitions, on April 18, 1908, the American Aviation Prize Fund was established by aviation pioneers James Means, Octave Chanute, A. Lawrence Rotch and telephone inventor Alexander Graham Bell. The present ephemeral handbill was circulated to "those interested in aviation" soliciting $100 from 250 individuals in order to fund a prize for an international sporting contest of flying machines. Published just prior to the Wright Brothers May 1908 demonstrations in Europe, the prize was evidently an early attempt to establish similar air shows in the United States. (Inventory #: 35832)
$500.00 add to cart or Buy Direct from
Donald A. Heald Rare Books
Share this item
Donald A. Heald Rare Books
Offered by