The Garden of Eden: or, An accurate Description of all Flowers and Fruits now growing in England, with particular Rules how to advance their Nature and Growth, as well in Seeds and Herbs, as the secret Ordering of Trees and Plants ... The Sixth Edition 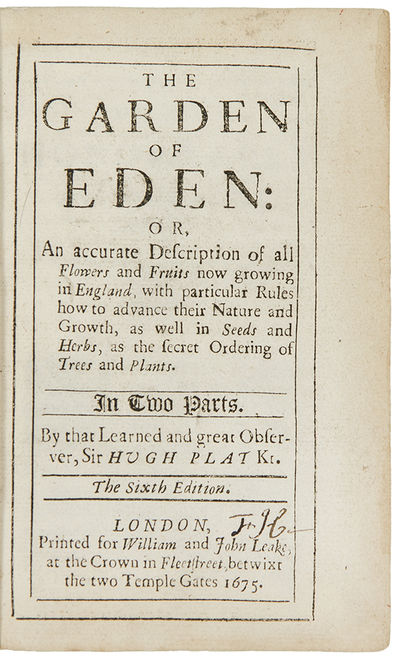 Two parts in one, 8vo

by PLAT (or PLATT), Sir Hugh (1552-1608)
London: William and John Leake, 1675. Two parts in one, 8vo. [28], 148; [16], 159, [1]pp. Contemporary mottled calf, covers ruled in blind, rebacked to style, flat spine ruled in blind, red morocco lettering piece Provenance: F. H. (early initials on the title) The final edition, complete with both parts, of among the most influential English gardening books of the 17th century. "Sir Hugh Platt (1552-1608), held by Richard Weston to be 'the most ingenious husbandman of the age he lived in' ... devoted [his life] to literary work and to the study of husbandry and gardening. He was also interested in all kinds of inventions and experiments, and in consideration of his services in this field was knighted by James I on 22 May 1605 ... His work on gardening entitled Floraes paradise ... appeared in 1608, the year of his death ... He wrote his book from his own practical experience as well as from information supplied to him by other gardeners ... Floraes paradise continued to be published after the author's death but with the new title of The Garden of Eden and edited by Charles Bellingham ... In 1660 was issued The second part of The Garden of Eden ... Readers who questioned the authenticity of this work were invited to 'see the original manuscript under the authors own hand..'" (Henrey). Styled on the title as the sixth edition, it is the second combined edition of both parts and the final edition published in the 17th century. The second part includes its own title and pagination. Fussell pp.15-16; Henrey 299; Hunt 340; Wing P2388; ESTC R31801. (Inventory #: 35334)
$3500.00 add to cart or Buy Direct from
Donald A. Heald Rare Books
Share this item
Donald A. Heald Rare Books
Offered by