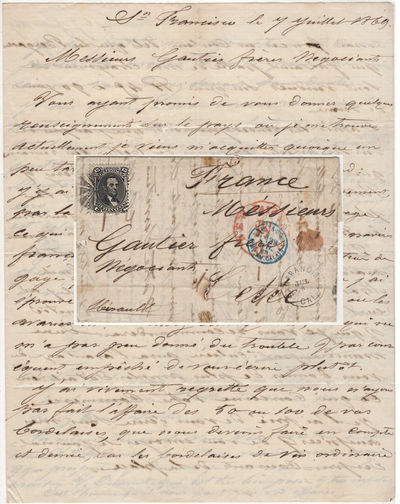 by From G. Caussy to the Gautier Brothers
Letter from a French ship captain in San Francisco to a wine wholesaler in Southern France franked with the first Lincoln stamp issued by the United States
This three-page folded letter, in French, measures 16.5" x 10.5" unfolded. It is dated "Sn Francisco le 7 Yuillet 1869" and franked with a 15-cent black Lincoln stamp (Scott #77) canceled with a 'fancy' black circle-of-wedges. Three postmarks are on the front: a clear San Francisco postmark (Jul 8) in black, a large circular New York Paid postmark (Jul 17) in red, and a Calais foreign mail receiving mark (Jul 29) in blue. A Paris postmark (Jul 29) and a scuffed Cette receiving stamp (Jul 30), both in black are on the reverse. Docketing notes the letter was mailed from San Francisco by G. Caussy on July 7th and received in Cette on the 30th. The letter is in nice shape with postal and opening wear. The #77 Lincoln stamp is sound and sharp with deep color; its perforations touch the design at the right and bottom.

In this letter from San Francisco, Caussy explains to the wine merchants who had contracted his service that

He has had a difficult voyage; three-quarters of his crew deserted, and his ship was damaged in a collision with an American vessel.
He further notes that he had been unable to sell the merchants' Bordeaux because it had darkened badly during the voyage.

He suggests that in the future, the merchants export fortified wines like sherry or port to San Francisco as he had discovered both sold much better than ordinary wine.

Additionally, he encourages the brothers to join in partnership with Victor Dumont, a French importer living in the city.

In closing, Caussy reports that the repairs to his ship have been completed and he will soon sail for Montevideo, Buenos Aires, and Rio de Janeiro.

(A transcript and translation of the letter are included.).
At the time this letter was written, California's viticulture industry was still in its infancy, and millions of liters of wine were being imported from French Mediterranean ports. By itself, Cette exported 57,000 pipes of wine in 1870 alone. The imported red and white wines were almost always of poor quality and shipped in wooden casks. Once the casks arrived in San Francisco, their contents were blended together by importers into various colors and strengths, and given a variety of impressive-sounding names; "under the guise of fictitious labels, [customers were led] to suppose [they] were drinking fine Bordeaux wines, whereas, in fact, [they] were drinking trash, . . . and [were] the laughing stock of the French wine exporters. . . ." This, however, started to change in the last two years of the 1860s when excellent California wines began to be made in marketable quantities, and imports of ordinary wines from France plummeted, although a market for foreign ports and sherries remained. (See Statements and Arguments . . . against the Proposed Franco-American Commercial Treaty, San Francisco: 1879.)

The 15-cent Lincoln stamp is considered by some to be the first U.S. commemorative stamp. It was first issued on 14 April 1866, the one-year anniversary of Lincoln's assassination, and was printed in mourning black. At the time, 15 cents was the postage rate to Belgium, France, and Germany, and examples on postally used envelopes are scarce; letters with content even more so. (See Haimann's "15-cent Lincoln" at Arago: People, Postage, and the Post, Gasbarro's "Early Postage Stamps Honoring Abraham Lincoln" at the Civil War Blog, and Scott's Specialized Catalog of U.S. Stamps.) Although letters with 15-cent franking from the United States to Europe are uncommon but not rare, most extant examples are from major east coast cities to major European cities like Paris, Berlin, and Brussels.

Mail from San Francisco to the French Mediterranean town of Cette is decidedly uncommon. Only one other known example exists. (See Frajola's PhilaMercury online.) This letter traveled for ten days from San Francisco to New York where it was loaded on a ship bound for Calais, France. It was then dispatched to Paris, where it was redirected south to the Mediterranean city of Cette.

This letter wins a desirability trifecta. Covers bearing the Lincoln stamp are relatively scarce; the letter's route from San Francisco to Cette is highly unusual if not unique, and the content reveals the dying market for imported French wines just as California viticulture was taking hold. At the time of listing, nothing similar is for sale in the trade; Rare Book Hub and ABPC show no auction records for similar items, and no similar letters are held by institutions per OCLC. (Inventory #: 009181)
$1,750.00 add to cart or Buy Direct from
Read'Em Again Books and Paper
Share this item