The Word of Life: A Light Held Forth by the Bible Societies. A Sermon delivered in the New Presbyterian Church in Chapel Street, Albany, Ninth February 1817; by appointment of the Albany Bible Society; and Published at their request to which is added The Report of the Board of Managers 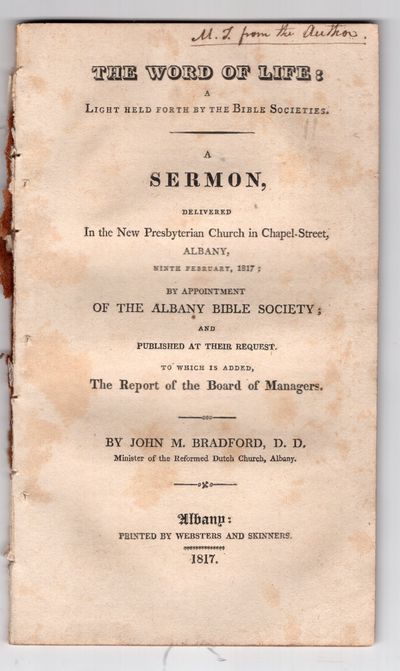 by John M. Bradford, D. D.
Albany : Websters and Skinners, Printers , 1817. First Edition. Pamphlet. Very good. 48p., removed, 22 cm. Trimmed, with inscription 'M.T. from the Author' in ink, top border. "Report of the board of managers of the Albany Bible Society, February 1817. To which are added, the treasurer's account, for 1816; names of the officers, and a list of the subscribers, to the said Society," p.[33]-48, with separate title page. Complete, with report. Bradford, (1781-1826), Presbyterian minister of the Reformed Dutch Church, Albany, noted for his oration, gentlemanly qualities and handsome appearance, was removed from the pulpit after increased erratic behavior and drunkenness. (Inventory #: 1929)
$40.00 add to cart Available from
Little Sages Books
Share this item