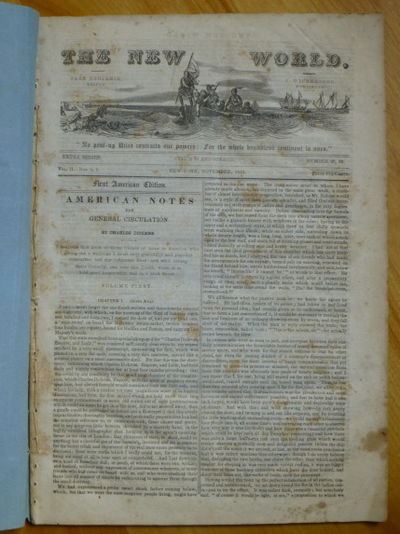 by Dickens, Charles
1842. First American Edition. New-York: J. Winchester, Publisher, November 1842. Original self-wrappers, bound into very early plain blue wrappers. "First American Edition" -- second impression. As first put forth in a 1975 article by Peter Bracher and (soon) to be confirmed in Walter Smith's upcoming bibliography, this edition (12-1/2 cents) was published at 2:00 PM on Monday, November 7, 1842 -- just TWO HOURS before the "Brother Jonathan Extra" edition (12-1/2 cents) managed to get out on the streets. Harper got its edition (12-1/2 cents) out by early or mid-afternoon on the following day (Tuesday the 8th), and Lea & Blanchard of Philadelphia had an edition (first 25 cents, then 12-1/2) on the streets by Wednesday the 9th. (L&B was the only one of these American publishers to have had a prior agreement with Dickens for publication in America -- but Dickens was so upset by the lack of an international copyright law, he forewent any such negotiations -- which is why none of these publishers had advance sheets, and all simply had to wait in the harbor for the first boat to arrive with the UK edition (published in October), and then rush to press. The Winchester publication occupies 46 pages of double-column text (followed by one leaf of ads); it was originally issued without an outer wrapper. This copy is actually from Winchester's second impression (not so stated) -- which came out around November 19th (a few minor differences include having "Number 32,33" printed correctly in the heading, and having "THE END" centered on page 46). Some later copies of this impression came with a decorative wrapper, but not this one; the first owner ("William B. Stafford | 1842 | Waterville, N.Y.") added this plain blue wrapper which he quickly signed and dated thrice. (This wrapper could easily be removed, but in our opinion its early dated signatures add something.) Condition is very good, the only flaw being where extra stitching was used to add the blue wrapper; it may be that there was initially a more substantial binding, for which these blue wrappers served as endpapers. In any case -- this is a scarce piece. Bracher (Bibliographical Society of America Vol 69) pp 365-376; curiously not in Podeschi (Yale); Carr (UTexas) B477(2); Wilkins pp 23-24. (Inventory #: 14152)
$475.00 add to cart or Buy Direct from
Sumner & Stillman
Share this item