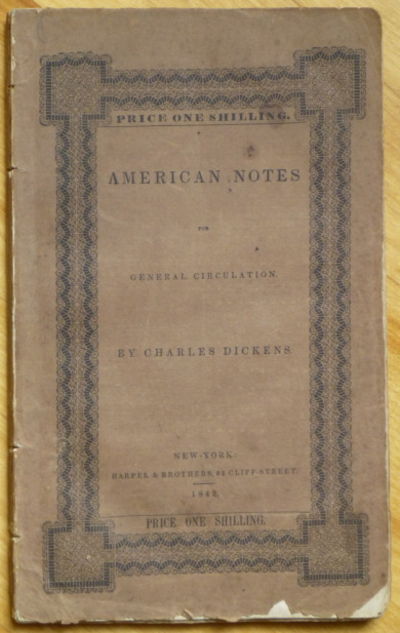 by Dickens, Charles
1842. New-York: Harper & Brothers, 1842. 4 pp ads dated Nov 2, 1842. Original brown printed wrappers. Third American Edition (just one day after the first!) of this book that resulted from Dickens's 1842 tour of America. As first put forth in a 1975 article by Peter Bracher and soon to be confirmed in Walter Smith's upcoming bibliography, this edition was published on November 8th, 1842 (the day after Winchester's "New World" edition and Wilson's "Brother Jonathan" edition -- but the day before Lea & Blanchard's (fourth American) edition. Dickens was so upset by the lack of an international copyright law, he forewent any negotiations with American publishers -- which is why none of these publishers had advance sheets, and all simply had to wait in the harbor for the first boat to arrive with copies of the UK edition (published October 19th), and then rush to press. This Harper edition bears the date November 2nd on the ads and on the inside rear wrapper, but, as the above bibliographers have researched, such a date is not necessarily the publication date (when the book is actually available to the public). A curiosity of this edition is that although prices on the rear and inside covers are in cents, the front cover twice states "price one shilling." This is a very good-plus copy, with minor wear at the extremities (rear wrapper a bit darkened, minor foxing throughout as usual). Podeschi (Yale) A67; Carr (UTexas) B479; Wilkins p. 24. (Inventory #: 14158)
$295.00 add to cart or Buy Direct from
Sumner & Stillman
Share this item