THE AMERICAN CREDO. A CONTRIBUTION TOWARD THE INTERPRETATION OF THE NATIONAL MIND with a TYPED LETTER SIGNED (TLs) by Mencken 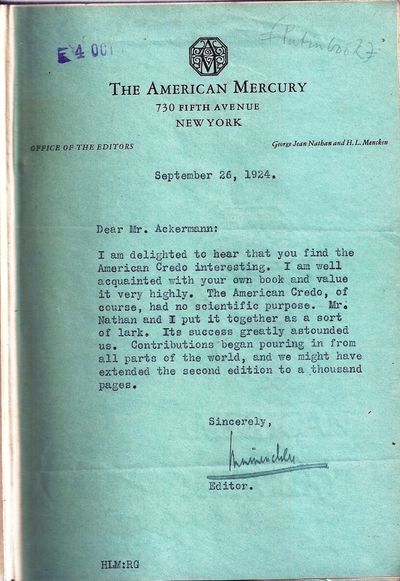 by MENCKEN, H. L. and NATHAN, George Jean
New York: Alfred A. Knopf, 1921. Second Edition, Revised and Enlarged. Hardcover. Part of the dustwrapper tipped in before the half-title page. Very Good, lacking the dustwrapper. Lightly tipped to the front endpaper is a Typed Letter SIGNED by Mencken on AMERICAN MERCURY stationery to a Mr. Ackermann, most certainly Carl William Ackerman, American journalist, author, and educational administrator, the first dean of the Columbia School of Journalism. In full: "I am delighted to hear that you find the American Credo interesting. I am well acquainted with your own book and value it highly. The American Credo, of course, had no scientific purpose. Mr. Nathan and I put it together as sort of a lark. Its success greatly astounded us. Contributions began pouring in from all parts of the world, and we might have extended the second edition to a thousand pages." With extensive pencil underlining and occasional notes by, we suspect, Ackerman.

The book Mencken is likely referring to is GERMANY THE NEXT REPUBLIC? (1917), which discussed the possibility of a successful democracy in post-Kaiser Germany. Ackerman also published articles headlined as "The Red Bible," featuring the first English edition of THE PROTOCOLS OF THE ELDERS OF ZION, an anti-Semitic hoax that had been published in Europe and recounted a Jewish plan for world domination. By replacing all the references to Jews with references to Bolshevists, he turned it into an anti-Bolshevist hoax. (Inventory #: 018927)
$250.00 add to cart or Buy Direct from Charles Agvent
Share this item