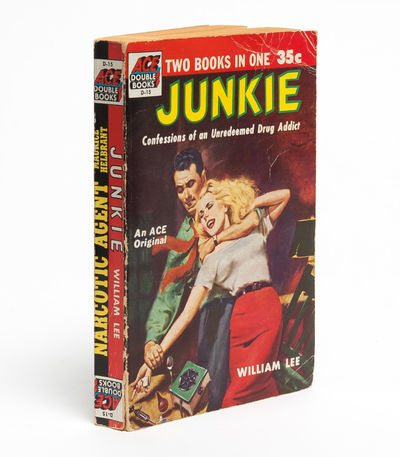 by Lee, William [William S. Burroughs]
New York: Ace Books, Inc, 1953. First edition. Paperback Original. Very Good +. First printing of William S. Burroughs first book, written under a pseudonym. Considered unprintable until Allen Ginsberg championed the work to a pulp paperback publisher, A.A. Wyn. Bound as an Ace Double with Narcotic Agent by Maurice Helbrant, Burroughs first work was largely overlooked by literary critics and libraries. This copy Very Good+ to Near Fine, appearing unread. Minor creasing at the corners and lower spine with a short tear. Pages browning as usual. Considered a seminal text for the Beat generation, Junkie is a semi-autobiographical work drawn from Burroughs' own experiences using and selling heroin. Written at the urgining of Allen Ginsberg, the book also benefited from Ginsberg's editing and promoting. It was ultimately produced in paperback form, which allowed it to gain cult status among his own generation, but cause delays in it being recognized by institutions or non-Beat intellectuals. Very Good +. (Inventory #: 2499)
$650.00 add to cart or Buy Direct from
Whitmore Rare Books
Share this item