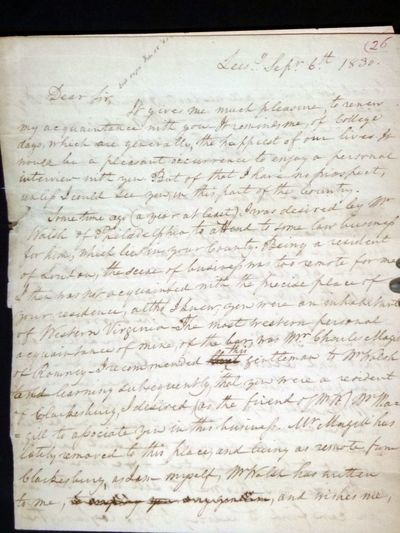 by Lee, Rev. Richard Henry (1794-1865)
4 pages, autographed, letter, signed. September 6, 1830. After graduation from Dickinson College, he studied law with Judge Thomas Duncan and began his practice in Loudoun County, Virginia. While residing at Leesburg {see postmark on letter), he edited the memoirs of his grandfather, Richard Henry Lee which was issued in a 2 volume set in 1825. He also was the Acting Secretary of the Loudoun Manumission and Emigration Society in 1830. Although there were according to Benjamin Lundy, publisher of the Genius of Universal Emancipation over 100 antislavery societies in the slave states with over 5,000 members, the north had only 24 such organizations with less than 1,500 members. It was the Nat Turner revolt in late 1831 which changed everything. Besides a plethora of laws applying to slaves, free blacks were in danger of being enslaved. The social pressure against those who had antislavery views was often accompanied with threats of violence. In 1833 he relocated and retained his law practice and became a professor of classical languages at Washington College in Pennsylvania. After a long career as a lawyer, he began the study of theology and in 1858 became an Episcopalian priest until his death in 1865. Here we have his letter to John Allen, a lawyer, of Clarksburg, Virginia, who was a classmate of his at Dickinson College some twenty years before. He needs assistance on a case relating to properties in Harrison County. He notes the parties as being William Walsh in Philadelphia, Charles Magill (also of the bar of Romney), the estate of General Maylan of Philadelphia, and various legal complications. An excellent example of a noted Virginian who was proud of his family heritage. He later donated his collection of letters from his Grandfather, Washington, and Jefferson to the Athenaeum in Philadelphia, Harvard, and the University of Virginia. An early tape mend to verso along fold. A rare letter with much interest at a crucial time in his life. Fragile but easily readable throughout. (Inventory #: 026058)
$450.00 add to cart or Buy Direct from
ALCUIN BOOKS, ABAA
Share this item