The Bloody Assizes: Or, A Compleat History of the Life of George Lord Jefferies, from His Birth to this Present Time. Wherein, Among other things, is given a true Account of his unheard of Cruelties, and Barbarous Proceedings, in his whole Western Circuit 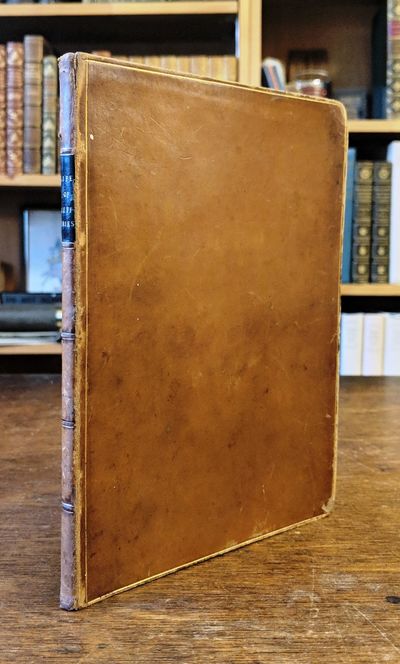 London: Printed for J. Dunton at the Black Raven in the Poultrey, over against the Compter, and sold by R. Janeway in Queens-Head-Alley in Pater-noster-row, 1689 First edition. Very scarce. Octavo. 19x15 cm. Pp. 70, [1, advert.]. Collated complete. Early 20th century full calf, black leather spine label, marbled endpapers. Later engraved bookplate. Contemporary owner's name at head of title page. Later owner's embossed stamp to blank flyleaf. Title page toned, minor rubbing to spine ends and corners, slight wear to front joint at head of spine, label a bit chipped. A fine copy. Attributed to James Bent (most likely a pseudonym of John Dunton). Titus Oates was also considered a contributor to this work. Pp. 5-8 contain A Poem to the Memory of George Lord Jefferies by John Carter. George Jeffreys, 1st Baron Jeffreys of Wem (1645-1689) was known as the "Hanging Judge." He became notable during the reign of King James II, rising to the position of Lord Chancellor after the Monmouth Rebellion. His conduct as a judge was to enforce royal policy, resulting in an historical reputation for severity and bias. Earlier, during the "Popish Plot," he was frequently on the bench which condemned numerous innocent men on the perjured evidence of Titus Oates. These condemnations were remembered against him in 1685 when he secured the conviction of Oates for his perjury at the same trials. This trial was Jeffreys' first major trial under the reign of James II. Jeffreys' historical notoriety comes from his actions in 1685, after Monmouth's Rebellion. Jeffreys was sent to the West Country in the autumn of 1685 to conduct the trials of captured rebels. Hundreds were executed. Jeffreys remained a Protestant, despite his loyalty to James II, the last Roman Catholic to reign over the British kingdom. During the Glorious Revolution (1688) when James II fled the country, under siege by his son-in-law William of Orange, Jeffreys stayed in London until the last moment, the only legal authority in James' abandoned kingdom to perform political duties. Jeffreys was eventually captured by William's troops and was dragged to prison "for his own safety" as he was terrified of the public who intended "to show him that same mercy he had ever shown to others." He died of kidney disease while in custody in the Tower of London on April 18, 1689, the year this book was published. Full title: The Bloody Assizes: Or, A Compleat History of the Life of George Lord Jefferies, from His Birth to this Present Time. Wherein, Among other things, is given a true Account of his unheard of Cruelties, and Barbarous Proceedings, in his whole Western Circuit. Comprehending The whole Proceedings; Arraignment, Tryals, and Condemnation of all those who Suffer'd in the West of England, in the Year 1685... To Which is added... the Dying Speeches and Prayers of many other Eminent Protestants.. (Inventory #: 8295)
$450.00 add to cart Available from
Argonaut Book Shop
Share this item
Argonaut Book Shop
Offered by

Visa, Mastercard, American Express, Discover Card, Diner\'s Club, PayPal, personal checks (drawn on U.S. funds) and International money orders accepted. Institutional purchase orders accepted. Postage & handling additional. We ship UPS within the United States unless another service is requested. International orders are shipped Airmail. California residents will be charged sales tax at the prevailing rate.All items are guaranteed as described. Any item may be returned within seven days of receipt for a full refund of the purchase price provided the item is returned in the same condition as received. We will also refund shipping costs if the return was a result of our error.
More from this seller

The Interest Of these United Provinces. Being a Defence of the Zeelanders Choice. Wherein is shewne, I. That we ought unanimously to defend our selves. II. That if we cannot, it is better to be under England than France, in regard of Religion, Liberty...

Middleburg : : Printed by Thomas Berry, according to the Dutch Copie , 1673
(click for more details about The Interest Of these United Provinces. Being a Defence of the Zeelanders Choice. Wherein is shewne, I. That we ought unanimously to defend our selves. II. That if we cannot, it is better to be under England than France, in regard of Religion, Liberty...)