A Birdseye View of Indian Policy Historic and Contemporary 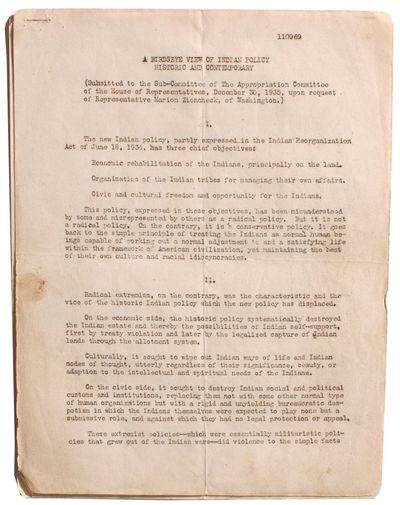 by Collier, John
[Washington, D. C. ]: N. P., 1936. 10½" x 8". Photomechanically reproduced typescript. 14 loose leaves printed rectos only. Very good minus: creases from folding, moderate wear, a bit dust soiled. An early report on the purpose and progress of the Indian Reorganization Act of 1934 ("IRA"). It was written by John Collier, the Commissioner for the Bureau of Indian Affairs from 1933-1945 and the founder of the American Indian Defense Association which fought to protect Native Americans' religious freedom and tribal lands. He was the prime mover behind the IRA. The IRA's major goal was to reverse the government's approach of assimilation of Native Americans into American society as well as its treatment of their lands. It sought to strengthen tribes and help them preserve their traditions and culture. This paper was written approximately 18 months after the effective date of the act and appears to be an attempt by Collier to further explain its purpose and silence critics. The paper was submitted to the House Appropriations Committee in December 1935. Collier started by saying the IRA was not a radical policy but "a simple principle of treating the Indians as normal human beings capable of working out a normal adjustment to and a satisfying life within the framework of American civilization, yet maintaining the best of their own culture and racial idiosyncrasies. " He argued that the former policy was an extremist and militaristic approach that grew out of the Indian Wars, and that it "thrust the Indians into an economic, spiritual, and social no-man's land. " He discussed various aspects of the old policy such as treaty breaking and expropriation of land through allotment, and provided great detail on the failure of those policies, ultimately calling them "a crude and cruel point of view based on the attitude that the Indians at their worst were dangerous savages and at their best were immeasurably inferior to whites. " He went on to explain how the IRA was fixing those ills, and would continue to fix them, as well as provide some form of restitution for past harm. He also shared the generally positive response to the IRA by Native Americans, as well as heartening socioeconomic statistics from its early implementation. OCLC locates ten physical copies over three entries. An important explanation of the Indian Reorganization Act soon after its enactment, with arguments justifying its existence and documenting its early successes, written by the man who brought it into existence. This item is offered by Langdon Manor Books, LLC, antiquarian booksellers. Please do not hesitate to contact us for additional information and/or photos and we will respond promptly. We package our items carefully, ship daily, and have a no hassle returns policy--your satisfaction is guaranteed. We are members of the Antiquarian Booksellers' Association of America (ABAA) , the International League of Antiquarian Booksllers (ILAB) and the Independent Online Booksellers Association (IOBA) and adhere to their rules of ethics. (Inventory #: 2377)
$575.00 add to cart or Buy Direct from
Langdon Manor Books
Share this item