Correspondence to Native American Who Won the Distinguished Service Cross in World War I. 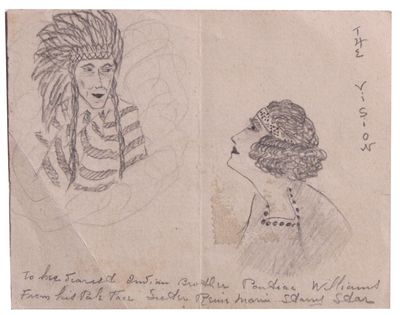 by [Williams, Pontiac J. ]
Mostly Michigan, 1935. Handwritten letter (two pages) , two typed letters (one page each) , handwritten and illustrated note measuring 3½" x 4 3/8" and four mailing envelopes. Generally very good. A small group of letters and mailing envelopes to Pontiac J. Williams, a Native American from Michigan who won the Distinguished Service Cross in World War I while serving with Company K, 125th Infantry Regiment, 32d Division. His citation stated that "Private Williams volunteered to go out in front of our lines and bring in a wounded runner. Although he was shot in the face before he reached the runner, he accomplished his mission. " The letters to Williams relate to the real estate of John Pontiac, presumably a relative. Williams was trying to make a claim on land that John Pontiac received in 1871 and he was informed by the Office of Indian Affairs that they could not help. The handwritten letter is from another Native American named Jim Pontiac, suggesting that he and Williams meet so that they could work together on the claim. The illustrated note is from a friend, a Caucasian woman who called herself "Starry Star" and Williams' "Pale Face Sister. " This item is offered by Langdon Manor Books, LLC, antiquarian booksellers. Please do not hesitate to contact us for additional information and/or photos and we will respond promptly. We package our items carefully, ship daily, and have a no hassle returns policy--your satisfaction is guaranteed. We are members of the Antiquarian Booksellers' Association of America (ABAA) , the International League of Antiquarian Booksllers (ILAB) and the Independent Online Booksellers Association (IOBA) and adhere to their rules of ethics. (Inventory #: 2376)
$185.00 add to cart or Buy Direct from
Langdon Manor Books
Share this item