The Manuscript Edition of The Writings of Henry David Thoreau. 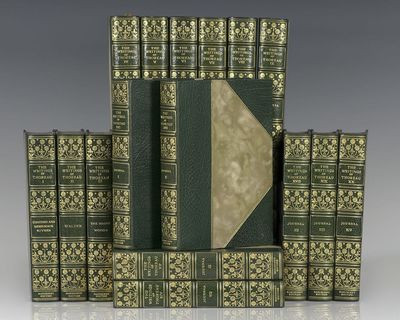 by Thoreau, Henry David
Boston: Houghton Mifflin and Company, 1906. The manuscript edition of the writings of Henry David Thoreau. With the original manuscript sheet by Thoreau from his journal tipped-in to volume 1. The two page manuscript fragment comprises 58 lines from "Autumnal Tints," in altered form, published in the Atlantic Monthly, October 1862, and collected in Excursions the following year. The fragment concludes with the line containing the title phrase: "When you come to observe faithfully the changes of each humblest plant, you find that each has sooner or later its peculiar autumnal tint, or tints [...]." Octavo, 20 volumes. Bound in the publisher's three-quarter green morocco over marbled boards, spine elaborately tooled and lettered in gilt in compartments, raised bands, top edge gilt, marbled endpapers. Signed by the publisher. Illustrated in each volume with a photograph of flowers and a hand-colored scenes used as frontispieces and additional plates inserted throughout. In fine condition without wear. Henry David Thoreau was an American essayist, poet, philosopher, abolitionist, naturalist, and historian. A leading transcendentalist, Thoreau is best known for his book Walden, a reflection upon simple living in natural surroundings, and his essay "Civil Disobedience" (originally published as "Resistance to Civil Government"), an argument for disobedience to an unjust state. Thoreau's books, articles, essays, journals, and poetry amount to more than 20 volumes. Among his lasting contributions are his writings on natural history and philosophy, in which he anticipated the methods and findings of ecology and environmental history, two sources of modern-day environmentalism. His literary style interweaves close observation of nature, personal experience, pointed rhetoric, symbolic meanings, and historical lore, while displaying a poetic sensibility, philosophical austerity, and Yankee attention to practical detail. He was also deeply interested in the idea of survival in the face of hostile elements, historical change, and natural decay; at the same time he advocated abandoning waste and illusion in order to discover life's true essential needs. He was a lifelong abolitionist, delivering lectures that attacked the Fugitive Slave Law while praising the writings of Wendell Phillips and defending the abolitionist John Brown. Thoreau's philosophy of civil disobedience later influenced the political thoughts and actions of such notable figures as Leo Tolstoy, Mahatma Gandhi, and Martin Luther King Jr. (Inventory #: 97590)
$18500.00 add to cart or Buy Direct from
Raptis Rare Books
Share this item