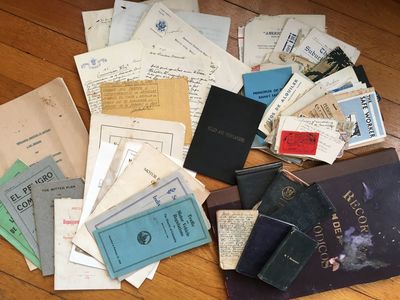 by Montgomery, Mal. T.
[Various places], 1932. Very good.. Seventy-five items, plus six small notebooks and one folio scrapbook. Some wear and soiling to a few items, but condition generally clean and quite good. Extensive archive of transit information for the cities of Lima, Peru, and Santiago, Chile, compiled by traffic expert M.T. Montgomery of Lancaster, Pennsylvania. Based near Lima, Montgomery gathered information on bus, rail, chauffeur, and rail-less trolley travel. Included here are manuscript notes and recommendations, typed reports, his pocket notebooks, travel ephemera, printed tracts and booklets, and more. A repurposed ledger serves as a scrapbook, holding 120 pages of Spanish-language newspaper clippings documenting traffic conditions and issues. The archive contains about thirty-five pieces of travel-related ephemera -- bus tickets, calling cards, transit passes -- from Montgomery's time in South America. There is a large broadsheet advertising the fiestas for Carnaval, complete with a map of the festivities on the back. . Also present is a blueprint plan of Lima showing the omnibus service routes in 1927, and a mimeographed study on the bus service between Santiago and San Bernardo. In his work, Montgomery points out the traffic chaos in the region and the associated difficulty of making profit under the current rate for fares. He provides a list of recommendations for ameliorating the situation, including "All taxis until further notice will work only 20 days per month which will reduce the vehicles on the streets ." Other memos include "High Spots of Improvements Made in Tramway Service in Cordoba - Mendoza - Santa Fe - Tucuman & Parana"; "Personal Views Regarding Points Discussed at Tramway Managers Meeting"; and "A Few Facts about Schedules: One Man's Opinion." He also recommends that businesses building factories in South America not hire Latin American managers, lest they lose control of their customer base. Montgomery appears to have been worried about the threat of Communism, as well, as there are a handful of manuscripts and pamphlets documenting the dangers of that political bent. A wonderful trove of information on an unusual subject, giving the perspective of an American specialist on the issues of traffic and transportation in South America. (Inventory #: 91)
$850.00 add to cart Available from
McBride Rare Books
Share this item