Under Fire. The Story of a Squad. (Le Feu: journal d'une escouade). Translated by Robin Buss 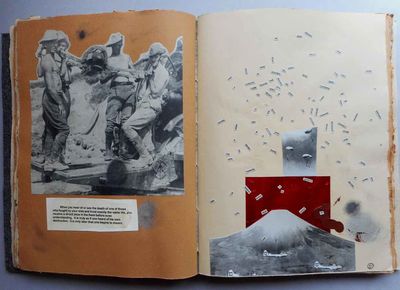 by McCallion, Barry. Henri Barbusse
East Hampton, NY, 2017. Unique artist's book, on three different St. Armand papers in tan / brown, signed and dated by the artist, Barry McCallion, on the colophon page. Page size: 9.5 x 12 inches; 63pp. plus colophon and titlepage. Bound: hand sewn by Joelle Webber at Mermaid Bindery into tan St. Armand paper wrappers, laid into grey felt portfolio by Barry McCallion with title stenciled in red outlined in silver gilt with two pieces of barbed wire separating under and fire and underlining "fire" with black mesh screening in three pieces on spine, housed in tan cloth over boards clamshell box with title lettered in black on tan paper insets on spine and front panel. The book is a selection of texts from the novel by Henri Barbusse. The artist has selected sentences and paragraphs from the text, copied them, enlarged some, printed on various papers and collaged to the pages of this book. They are surrounded by photographs from various conflicts, with painting, handwritten words in India ink, printing ink, metal foil and acrylic paint. The whole reflects on the brutality that is war - each and every war. Barry McCallion notes in his colophon, "The hundred years between then (publication of UNDER FIRE) and now have seen a recurring and uncanny sameness of bloodied fields and trenches, mountains and beaches, mud and wire, snow and sand...A book in protest, his and this." He has used images from the First and Second World Wars, Korea, Viet Nam, Iraq and Afghanistan. He adds in the colophon, "I have attempted to heave up a century's weight of agony and loss in one book, grouping images from different times to create a single, immediate and simultaneous present." Henri Barbusse wrote UNDER FIRE in 1916 after serving in the French army for fifteen months in the trenches in World War I when wounds lifted him from the French front line. Considered the first of the modern anti-war novels and was awarded the Prix Goncourt. The author's harrowing details of trench warfare have lost none of their power to appall. Mr. McCallion's book succeeds in calling to mind the terrible tragedies and loss when people go to war. (Inventory #: 11365)
$4500.00 add to cart or Buy Direct from
Priscilla Juvelis
Share this item

Anne with an e (Anne of Green Gables)

Ft. Lauderdale, FL 2019
(click for more details about Anne with an e (Anne of Green Gables))
View all from this seller>