1846-1866 Carpenter Family Correspondence from Missouri and Kentucky. Including Domestic Life in Missouri during the Civil War 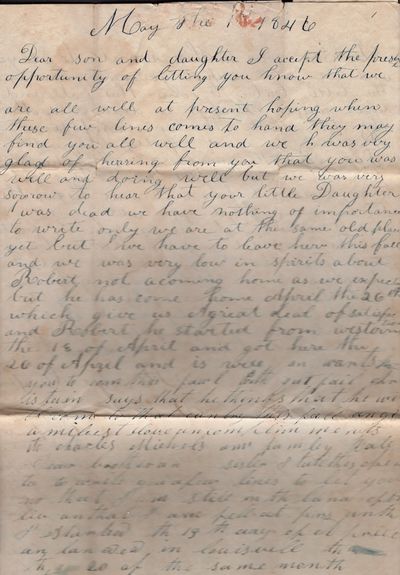 by [A. J. Carpenter; Susan Carpenter]
Missouri, Kentucky, 1866. Archive. Very good. A mini archive of 6 correspondence letters dated between 1846-1866 and 4 receipts from 1852-1877. All correspondence and receipts were addressed and owned by A. J. Carpenter, his wife Susan Carpenter and family. 21 pages of hand written correspondence in the 6 letters. All letters have been neatly folded. One letter is faded and difficult to read. Contents of the letters provide first hand source material of the conditions, struggles, and everyday life before, during and following the Civil War. Three of the letters in this group are dated between April 1864 and March 1865. Three of the four receipts, which accompanied the letters, are printed forms filled in with hand written information. The fourth receipt is completely hand written and dated 1877. Condition of the mini archive is very good. The letters are filled with domestic events; personal news of relatives; farming; and references to neighbors, aqaintenances and personal comments regarding the Civil War. Following is a summary of the dates, names, locations and contents of the 6 letters (without corrections made to the spelling or English):

1. May, 1, 1846. Approx. 12.5" x 8" folded folio letter. 2 pages of content. No postal markings. Addressed on the blank page: "to Mr Jackson Carpenter Grundy County by the politeness of A G fawkner." This letter is addressed, "Dear Son and daughter" and is signed at the end "Rachel Carpenter - Jackson (an) susan Carpenter." Below the inscription is added correspondence apparently in the same hand (similar to adding P.S. to the end of a letter). Rachel Carpenter writes in the beginning that "we are well at present." She matter of factly states next, "..hoping these few lines comes to hand they may find you all well and we (h) was very glad of hearing from you that you was very well and doing well but we was very sorrow to hear that your little Daughter was dead we have nothing of importance to write only we are at the same old place yet but we have to leave here this fall and we are very low about spirits about Robert not a coming home as we expecting." Rachel also informs her son and daughter of the death of Uncle Rufus.

2. July 28th, 1850 Garrard County, Ky. Approx. 10" x 8" folded paper. 3 pages. 4th page blank. The first paragraph of the letter is in brown ink and the remainder in blue ink. Good condition with some faint sections. Appears to be three separate letters all written in the same hand and combined into one letter. Each section is signed with a different family member name. The first sentence of the first letter is addressed "Dear son and daughter..." The writer (not identified) states "we had a very dry summer and the corn is backward and little wheat is very good" The writer references an odd journey regarding Robert, "Robert has arrived home he was gone 3 months he came home naked and almost starved he was entirely deranged but he has got much better composed in his mind he is scarcely able to walk about since he has got better in his mind we dont know where he has been all the time he was in illinois the first we heard of him in A little town called Kaskaskia..." The first letter is signed "Robert and Polly Carpenter to Jackson and susan Carpenter." The next two sections letters contain domestic happenings of other Carpenter family members. The second section is addressed "Dear Brother and Sister and is signed "Rawsy Jane Carpenter to Jackson & susan Carpenter. The third section, also addressed "Dear Brother and sister," is signed Laura R. Carpenter to Jackson and susan Carpenter."

3. Three letters in one: April 10th, 1864, Benton Mo. [AND] 2 letters dated April 15 1864. Approx. 8" x 10" folded paper. 4 pages of content. No postal markings. Ink is very faint and difficult to read in spots. The letter is split on the main fold and mostly detached but still together. The first letter is addressed "Dear uncle J." and signed "Rufus (sp.?) Carpenter to A. J. Carpenter". Carpenter writes his relative, "I expect you are thinking I am ready to go to California by this time but it is a mistake I have made no preparations for it I may come next spring if I can get the chance I may be Drafted and have to go in the service. Grundy has filled its number for the last call.." The nephew writes of about farm matters and "Greenbacks are plenty". He also gives names of people leaving for California and the plains. He adds that aunt Rachel is not well, went to the Doctor, and is very weak. She "sold her Oxen for $100". An interesting reference to African Americans in the area is made by the nephew in plain terms, "You wanted to know where the n....s was gone they took them to St Louis and put them in the Army where they ought to have been a long time ago." Carpenter continues, "Jo Marshall is in the fifth Iowa Cavalry and is at Benton Barracks St Louis....it is the order now for us all to enroll in the militia against the first of May those that dont want to enroll can pay thirty dollars I expect to get a certificate of disability as my health is very bad at this time." Carpenter relates that refugees and neighbors are living in other peoples homes at this time and provides information on aquaintenances including Henry Ricketts discharge to get married; O. J. White was taken prisoner of War and exchanged; and Dick Blue came very near killing Bill Rucker, etc. The second letter, dated, April 15, continues right after the first and is addressed "Dear Aunt". Not known who the writer is of this letter. An interesting quote from the writer, "...we are a getting a long times are better than they was when you left here but no talk of peace yet they still (?) for more months wants fights there Battels I reckon they will fight till the men is all killed and tho they wil". The third letter from Trenton Mo., is also dated April 15 1864. This section is addressed "Mrs Laura A Saunders - Dear and most beloved cousin..." and is signed "From Sarah E Carpenter". The letter discusses a recent wedding and the improving health of Rachel.

4. November 19, 1864. Approx. 8" x 5" folded paper. 4 pages. Addressed "Dear cousin J and signed "B (or R) H C - Livingston Mo". This letter starts off discussing family health. The writer states, "i am going to tell you what we have done this fall we have moved to Chillicothe the radicals run us of (off) they they give all the best men orders to leave and them that didant go they kild they kild)old man (?) they fore men come to his home and made him give up all his money and his wife went for harrison returns and befor she come back they told him to come to the dore and to call his wife to come here if she wanted to see a dam dog die and they shot him with eight buckshot and (?) was holding him by the arm when they shot and now they have moved to illinoise".

5. Trenton Mo March 5 1865. Approx. 8" x 5" folded paper. 4 pages. This letter is addressed "Mr A J Carpenter Dear Uncle" and signed "R. H. Carpenter." Carpenter is glad to hear from his Uncle, "I received your unexpected letter a few days ago and was glad to from you once more for I had come to the conclusion that you had forgot you had any kin folks friends here. I will give you a brief history of my trials since I last wrote to you. I suspect you are apprised of the fact that Pap left his farm and moved to Chillicothe for his safety he was taken with pneumonia from about the 22 of Jan. and Died the 1 of Feb. Mother health grew worse and she too was taken from us the 4 of Feb and side by side they were buried." R. H. Carpenter discusses his parents illness and passing and notes "he was Buried by the Free Masons". Carpenter stayed in Livingston County and moved into his father's place to tend to the farm and estate. He adds he had "no need to grumble for the people treats me well." Other news included in the letter references Aunt Rachel Branaman moved to Platte last Nov. where "she lives a half a mile of uncle Jim Coleman's". He also provides status about A J Carpenter's friends and mentions that Orville Moberly is our sheriff. The last page of the letter references the recruitment of more boys to fight in the War, " several of the boys have gone in the service. Tom More Shelby Keith Peter Metsher (sp.?) and a good many more they belong to the 44 Mo. vol. In they are now down in Missippi the Darkeys are all gone except a few the men in the army and the rest to Iowa." R. H. Carpenter also mentions receiving a letter from "aunt susan".

6. March 11 1866. Approx. 9.5" x 7.5". 4 pages. This letter appears to be four separate letters in one (could be 3 letters in one but difficult to determine precisely). Trenton, Mo. is the only location given and this place is mentioned in the 4th letter. The contents of the letter for the most part are upbeat. The family is doing better and staying healthy for ther most part and staying busy farming. The first letter is addressed "Dear cousin J" and has a signature at the bottom of page 1 that is not legible. The second letter is not addressed but signed at the bottom "B W Carpenter Laura Sanders." The third letter is addressed "My Dear aunt." and is signed at the bottom "Barton Willie Carpenter to Susan Carpenter." The last letter on page 4, also dated March 11 1866 was written from "Trenton Grundy Co M." It is addressed "Dear Cousin George" and signed "Barton W Carpenter to George Carpenter."

A summary of the 4 receipts included with the letters:

Family Memorials A Series of Genealogical and Biographical Monographs on the Families of Salisbury, Aldworth-Elbridge, Sewall, Pyldren-Dummer, Walley, Quincy, Gookin, Wendell, Breese, Chevalier-Anderson, and Phillips. With Fifteen Pedigrees and An Appendix. PART II

The Scholars' Leaf of the Tree of Knowledge

Portland : Printed by C. W. Pennell & Co , 1849
(click for more details about The Scholars' Leaf of the Tree of Knowledge)
View all from this seller>